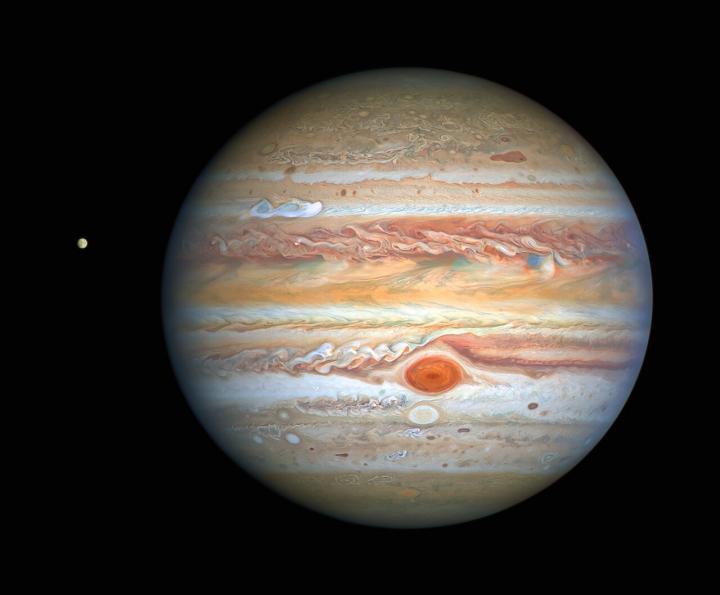 A new Hubble image of Jupiter released by NASA and the European Space Agency (ESA) reveals a new storm is brewing on the gas giant.

At this time of year, one of the brightest objects we can see in the night sky is one of our celestial neighbors, the largest planet in our solar system: Jupiter. First discovered by ancient civilizations long before recorded history, Jupiter has captivated astronomers and the public alike for centuries. Countless images have been captured of our largest gas giant, and the latest is one not to be missed.

The new image taken by the Hubble Space Telescope shows Jupiter in incredible detail, despite being taken from 653 million kilometers away. The image showcases a new developing storm that may one day rival the legendary Great Red Spot.

What is the Great Red Spot of Jupiter?

The Great Red Spot is a storm raging in Jupiter’s atmosphere that has existed for at least 200 years. Consistent observations of the spot have been carried out since 1830, though many believe it may have been around for hundreds of years earlier.

The spot behaves much like a hurricane, but on a far grander scale. It measures approximately 15,800 kilometers across, large enough to swallow the Earth whole. The spot rotates counterclockwise, completing a full rotation once every six Earth days. At its outer edges, winds can reach speeds upwards of 300 miles per hour, faster than any hurricane wind ever recorded on Earth.

The spot’s distinctive red color is instantly recognizable in a photograph, and it can even be observed through a medium-sized telescope by any eagle-eyed amateur astronomer. But why is it red? The short answer is we don’t know, but there are some theories. Some scientists suspect that Jupiter’s clouds are filled with ammonium hydrosulfide, a type of salt. When these suspended grains of salt are bombarded with solar radiation they turn a reddish orange; this may be where the spot gets its distinctive color from. While the spot’s color has been known to fluctuate over time, this new image shows it to currently be a rich shade of red. It was also found to be shrinking, a trend that has been observed since 1930. The reason for its dwindling size remains a mystery to this day.

One of the more surprising details of the new Hubble image is the discovery of a new storm emerging at Jupiter’s mid-northern latitudes. Appearing on the image as a bright white, stretched-out blob, the new storm was found to be moving at speeds of 563 kilometers per hour.

While it is normal for new storms to emerge on Jupiter from time to time, this storm appears to be more significant in terms of size and structure than most. Small, dark counterclockwise clumps have been observed trailing behind the main plume, a sight that has not been witnessed ever before. Researchers predict that this may be the beginning of a larger, longer-lasting spot in the northern hemisphere. It is possible that one day it might even rival the Great Red Spot.

Another feature change noticed by researchers was the changing color of the Great Red Spot’s smaller cousin, a storm called Oval BA (affectionately nicknamed Red Spot Jr.). Residing just below the Great Red Spot in the new image, Red Spot Jr. is a small storm that first appeared in the year 2000 following the collision and merging of three smaller storms.

When photographed in 2006, Red Spot Jr. was a deep shade of red much like its larger cousin. Since then, the small storm’s color has gradually faded to white. As this new image shows, while Red Spot Jr. remains mostly white, its core is beginning to darken. This may indicate that the storm is reverting back to the same red hue that it sported 14 years ago. Only time will tell what happens next.

What the future holds

They say a picture is worth a thousand words, and this image is no exception. The amount of information we can glean from this one image is nothing short of extraordinary. Through the collaboration of NASA and ESA, the Hubble Space Telescope has been able to capture some of the most exciting images of space ever taken.

As for Jupiter, research into the inner workings of the solar system’s largest planet is by no means slowing down. Hubble was able to capture an ultraviolet/visible/near-infrared image of Jupiter back in August 2020, which has given researchers a completely new view of the gas giant. Beyond this, 2022 will see the launch of ESA’s JUICE mission (JUpiter ICy moons Explorer). This spacecraft will explore both Jupiter and three of its large Galilean moons: Europa, Ganymede and Callisto. It will take JUICE seven years to reach Jupiter, so be sure to check back in again in 2029. In the meantime, at least we have a nice snapshot to enjoy.

This image was released by the European Science Agency (ESA) and the National Aeronautics and Space Administration (NASA).

Featured image: This latest image of Jupiter, taken by the NASA/ESA Hubble Space Telescope on 25 August 2020, was captured when the planet was 653 million kilometres from Earth. Hubble’s sharp view is giving researchers an updated weather report on the monster planet’s turbulent atmosphere, including a remarkable new storm brewing, and a cousin of the Great Red Spot changing colour – again. The new image also features Jupiter’s icy moon Europa. Courtesy of NASA, ESA, A. Simon (Goddard Space Flight Center), and M. H. Wong (University of California, Berkeley) and the OPAL team.