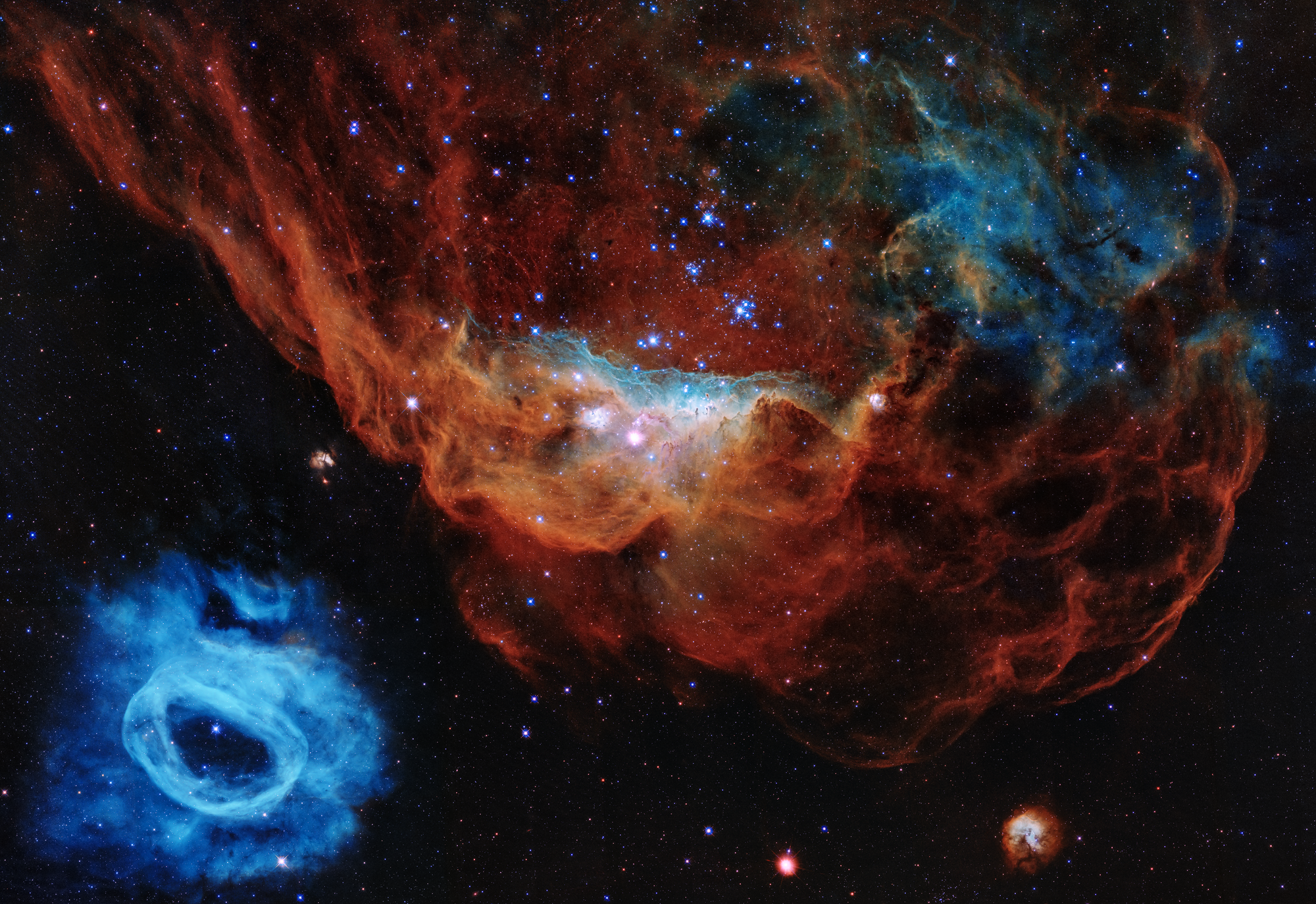 Orbiting high above the Earth, the Hubble Space Telescope has a clear view of the universe free from the blurring and absorbing effects of the atmosphere. In addition to observing visible and near-infrared light, Hubble detects ultraviolet light, which is absorbed by the atmosphere and visible only from space. The telescope has beamed hundreds of thousands of celestial images back to Earth during its time in space.

How the Hubble Space Telescope Works

Hubble is a Cassegrain reflector telescope. Light from celestial objects travels down a tube, is collected by a bowl-like, inwardly curved primary mirror and reflected toward a smaller, dome-shaped, outwardly curved secondary mirror. The secondary mirror bounces the light back to the primary mirror and through a hole in its center. The light is focused on a small area called the focal plane, where it is picked up by its various science instruments.

Launched in 1990, Hubble has been visited by astronauts four times in order to make repairs and add new instruments. Each instrument that flies on Hubble has special features that let astronomers study the heavens in different ways. Hubble’s unique capabilities can also be partnered with other space observatories and those on the ground to enable scientists to explore the universe in ways that no single mission could ever accomplish alone.

About the Featured Image: Cosmic Reef

In this Hubble portrait, produced by NASA and the Space Telescope Science Institute (STScI), the giant red nebula (NGC 2014) and its smaller blue neighbor (NGC 2020) are part of a vast star-forming region in the Large Magellanic Cloud, a satellite galaxy of the Milky Way, located 163,000 light-years away. The image is nicknamed the “Cosmic Reef,” because the nebulas resemble an undersea world.

The sparkling centerpiece of NGC 2014 is a grouping of bright, hefty stars, each 10 to 20 times more massive than our Sun. The stars’ ultraviolet radiation heats the surrounding dense gas. The massive stars also unleash fierce winds of charged particles that blast away lower-density gas, forming the bubble-like structures seen on the right, which resemble coral. The stars’ powerful stellar winds are pushing gas and dust to the denser left side of the nebula, where it is piling up, creating a series of dark ridges bathed in starlight. The blue areas in NGC 2014 reveal the glow of oxygen, heated to nearly 20,000 degrees Fahrenheit by the blast of ultraviolet light. The cooler, red gas indicates the presence of hydrogen and nitrogen.

By contrast, the seemingly isolated blue nebula at lower left (NGC 2020) has been created by a solitary mammoth star 200,000 times brighter than our Sun. The blue gas was ejected by the star through a series of eruptive events during which it lost part of its outer envelope of material.