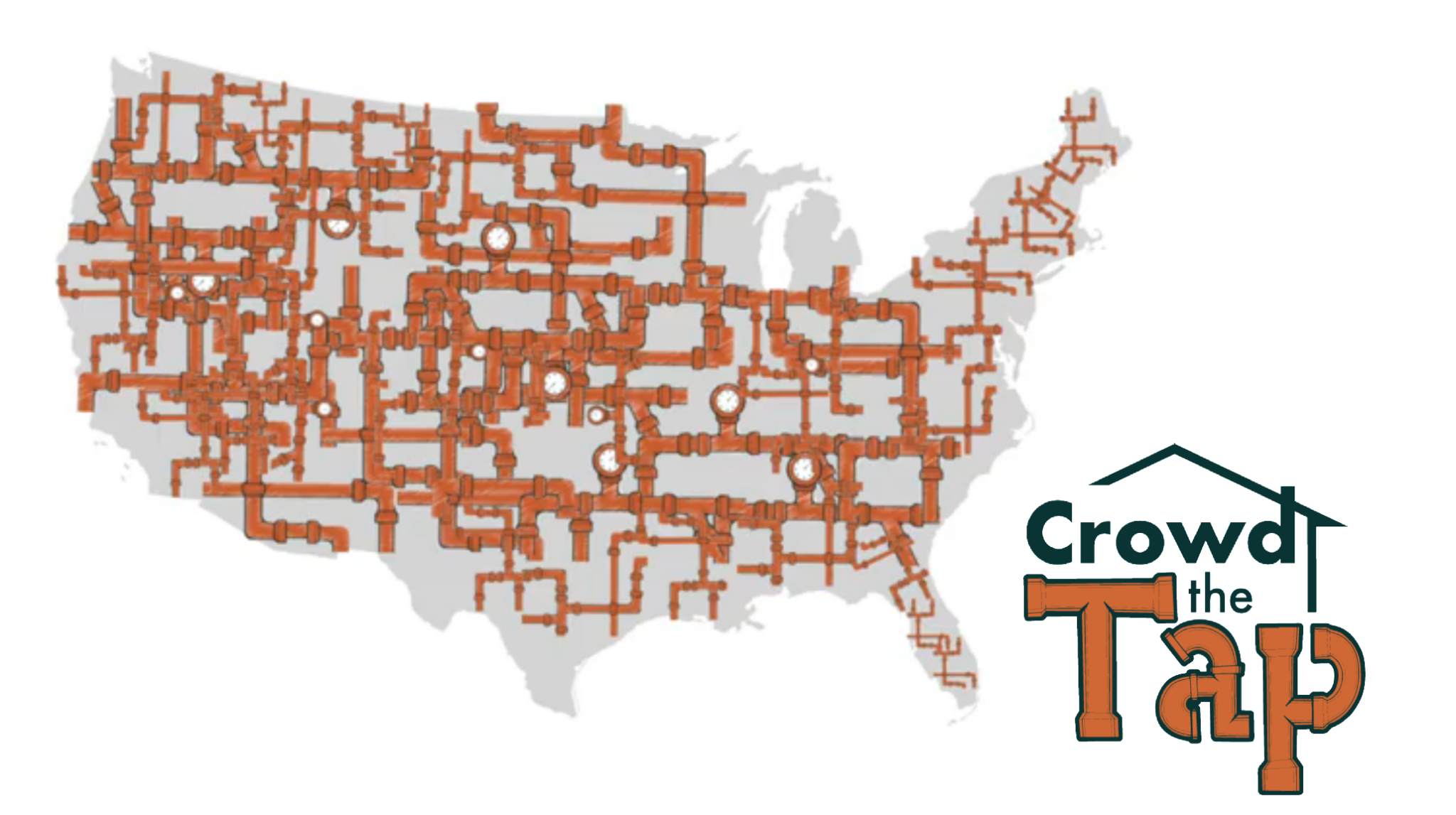 Lead pipes for transporting water have been a fixture of modern civilization for more than two thousand years.  Ancient Romans channeled water into homes and bathhouses through lead piping. In fact, the Latin word for lead, plumbum, is where we get the English word “plumbing.” Yet we have also long recognized that lead can have a serious impact on our health. Vitrivius, who lived during the first century BCE, wrote at length about the physical harm caused by lead exposure, concluding that “water should therefore on no account be conducted in leaden pipes if we are desirous that it should be wholesome.”

Two millennia later, we are still working to to follow that advice. Despite an initiative in the 1950s to replace lead pipes with copper, a 1986 ban on installing new lead pipes, and the Centers for Disease Control (CDC) recommendations that there is no safe level of exposure to lead, many homes in the US still get their water from lead pipes. How many, exactly? We don’t know the answer. But thanks to a new EPA-funded citizen science project called “Crowd the Tap,” people all over the US are being empowered to understand what kinds of pipes provide their drinking water. Findings from the project might one day lead to new data about disparities in environmental risk.

Today, nearly everyone in the developed world gets their water from the millions of miles of piping that make up our public water supply infrastructure. If you are one of the 86% of people in the US without a private well, then this water comes from a lake, stream, or underground aquifer, may be pumped through filters and provided chemical treatments at a water treatment facility, and is then sent through a network of underground pipes until it eventually emerges from your faucet.

The pipes that ferry this water around are made out of steel, copper, plastic, or lead. Having lead pipes increases your risk of lead poisoning, because the metal can leach out of these pipes and get into the water before it reaches the faucet. Lead poisoning is a serious medical condition that affects nearly every system in the body and can lead to abdominal pain, irritability, insomnia, memory loss, and even developmental delays and death. While many people with lead pipes never develop lead poisoning, the Crowd the Tap team believes everyone deserves to know whether they might be exposed to lead through their drinking water.

The goal of Crowd the Tap is to build the first national database of where lead pipes are found. But it is equally important to know where there are no lead pipes, which is why it is critical that the project also collects data about how other types of pipes are distributed across the country. Combined, this data will inform decision-making at every level, ranging from the individual to the local, state, and national levels, prioritizing areas for tap water testing and infrastructure replacement. The project, which is open to anyone in the US, recruits volunteers to test the pipes in their home. Volunteers that join the project download a data sheet on which they record information about their service line (the main pipe bringing water into the home, usually found in a basement or access point in the yard) and their indoor plumbing (the pipes that carry water to the different faucets in a home).

Volunteers also receive a kit with illustrated instructions, a penny, and a magnet. The magnet will stick to pipes made of steel and the penny is used to scratch the surface of pipes made of the other three materials. If the penny makes coppery streaks on the pipe that are the same color as the penny, then the pipe is made of copper. If there is no shine when the pipe is scratched, it is made of plastic. And if scratching the pipe leaves silver or gray streaks, it is probably made out of lead.

But understanding exposure to lead pipes doesn’t stop at understanding your home plumbing. For this reason, Crowd the Tap participants are also provided with a script to call their utility and ask about the piping material upstream of their home line.

Lisa Lundgren, PhD, is one of the researchers at NC State University working on the project. She said that relying on the public to collect and share the necessary data to get a complete picture of pipe infrastructure and its associated hazards is a means of empowering communities. “Safe drinking water improves quality of life, but in order to really know if you have safe drinking water, you need to know if the pipes that bring you drinking water are safe,” she said. “It’s therefore critical that folks, regardless of if they think they have lead pipes or not, test their pipes and make their findings part of the Crowd the Tap national inventory.”

One community that has been exposed to unsafe water because of lead pipes is Flint, Michigan. In 2014, the city infamously switched the source of its drinking water from Detroit’s water system to a cheaper alternative: the Flint River. The piping material carrying water from the river was old, made of lead, and soon contributed to a doubling of elevated blood-lead levels in the city’s children. One study led by researchers at Virginia Tech found that nearly 20% of the homes tested in Flint had lead levels in their drinking water above the federal “action level” of 15 parts per billion. Yet, for over a year and a half, residents were told that their water was safe.

What happened in Flint is a sobering example of the problems that can be caused by lead pipes. But the story of Flint cannot be separated from the community in which it took place. Flint is majority African-American, 40% of residents live below the poverty line, and one in six homes in the city have been abandoned. As many have pointed out, it seems unlikely that such serious mismanagement would have happened in a more privileged community.

Racial disparities in environmental quality are a national pattern that has inspired a movement called environmental justice. The goal of environmental justice is to recognize and respond to the fact that time and again, when researchers examine how environmental contamination is distributed among different communities, they find that communities of color bear a disproportionate share of the burden. For instance, a 2018 article found that minority communities are more likely to live in places with repeat water quality violations. Other research has found that air quality, exposure to carcinogens, and exposure to toxic waste and noise pollution, are unfairly concentrated in communities of color.

Through Crowd the Tap, there may soon be more comprehensive data about whether minority communities also shoulder a disproportionate burden of the risks from water pipe infrastructure.

Imani Bell is a graduate student at NC State working on Crowd the Tap. She says that one of the strengths of the project is that it was intentionally designed to make it easy to connect with other volunteers and with project facilitators in order to build community around addressing injustice. “This is important to me not only as a black woman, but also because I have met people of all ethnicities and races from all over the US and have heard their stories,” she said.

Crowd the Tap gives people from across the country a shared space to tell these stories and organize for change through its interactive online forum. “We want to be a place where people can go to submit data and discuss their findings with others,” said Bell.

Crowd the Tap is an example of a growing list of projects that use the tools of citizen science to address issues of environmental justice. While many of the first citizen science projects focused on crowd-sourcing ecological or geological data about, say, animal migrations or ocean tides, there is increased recognition of the value of using the citizen science framework to help people scientifically document their exposure to environmental risk.

“Currently, there is no existing community of people that spans the country rallying for understanding what their pipes are made of,” said Caren Cooper, PhD, Principal Investigator of the project. “Instead, there are communities here and there struggling for local change over water issues and many other environmental injustices. The value of the citizen science framework is that it connects people around the globe united by local issues.” This can give  local communities access to a powerful network of allies when the project is centered around environmental justice.

One of the ways to dismantle structural racism is to empower disadvantaged communities, and one of the best ways to empower these communities is to give them access to systems that create knowledge and a crowd of allies motivated around the same issue. These are the core strengths of citizen science.

Projects that link citizen science and environmental justice connect communities to resources and to agents of change. In many of these projects, university researchers work alongside community members across all the steps in the research process. By fostering meaningful connections between researchers and the public, projects like Crowd the Tap are redefining modern public health research, empowering communities to advocate for change, and ushering in a new era of citizen science.

–Bradley Allf is a graduate student in the Cooper Citizen Science Lab at NC State University, a poetry editor at In Layman’s Terms, and a freelance science writer.

Crowd the Tap is actively recruiting new participants to collect data about their drinking water pipes. The project is open to anyone living in the US, even those who think their pipes are not made out of lead. For more details, visit CrowdTheTap.org.