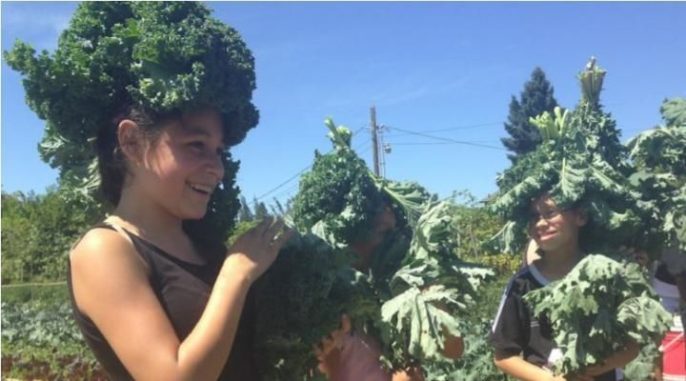 Three years after the Flint water crisis began, lead in drinking water continues to make headlines across the United States. But should city dwellers also be worried about lead exposure from something as innocent as their neighborhood garden? New research suggests that unless you are eating the dirt itself, you should be just fine.

America’s urban neighborhoods are often food deserts where fresh vegetables and fruit are sometimes impossible to come by. Some 49–93 million people in the United States are food insecure—they have limited or uncertain access to adequate food. The conditions that create food insecurity tend to overlap with those that increase lead exposure. While gardening has been identified as one way to help with food insecurity in urban areas, people are often afraid of eating food grown in soils that might contain lead. So is the danger really there? A study from the University of Washington shows that the benefits of growing vegetables in urban spaces far outweigh any potential risks of lead exposure.

Lead is the most common toxin in urban areas. It can be found in old paint or pipes and even occurs naturally in the soil. Until 1980, gasoline in the United States contained lead, so ongoing soil contamination from particulates that came out of tailpipes is common.

Lead exposure is extremely dangerous for young children, whose brains are still developing. It can cause developmental delays, learning difficulties, and even seizures and hearing loss. Direct pathways to lead exposure can include eating or inhaling soil or absorbing lead through the skin. Young children who play on the ground are more likely to ingest or inhale soil particles that have been tracked into homes. Ingesting soil that has lead in it is the most common direct pathway for lead to enter the bloodstream. The most common indirect pathway is eating crops grown in contaminated soil—a relatively new concern associated with the rise of urban gardening in recent years.

The research team at the University of Washington looked at a variety of factors, including lead levels in the soil and how

Lead is highly insoluble in soil, which means that most of it does not dissolve, so plants cannot easily take it up into their roots. Because of this, most plants do not absorb much lead, even in highly contaminated soils. The exception is root vegetables, such as carrots. These tend to take up more lead because of the way they absorb nutrients.

The researchers found that most direct lead exposure in urban settings is not from gardening. There is very little evidence that urban soils contain pieces small enough to inhale, and there is no evidence that lead is absorbed through the skin while gardening. So how is lead exposure in urban areas actually happening? The researchers discovered that elevated levels of lead in young children were closely related to the amount of dust found in their homes. This dust often comes into the house through shoes, pets, and windblown soil. When young children pick things up off the floor and put it into their mouths, they ingest the lead-contaminated dust.

While the team found no evidence of significant lead exposure from gardening, they did find a variety of advantages to growing and eating vegetables from city gardens. Improved nutrition, higher levels of physical activity, and increased food security were a few of the immediate benefits. There are also ecosystem services that the researchers explored. Providing habitat for animals, plants for pollinators to visit, and plant cover to keep down dust contributes to a healthier urban environment. The researchers believe that these advantages outweigh the very small risk of lead exposure from gardening.

[tweetthis]With food insecurity on the rise, urban gardening might be the tool needed to help solve a growing problem.[/tweetthis]

Even though lead exposure from urban gardening is unlikely, the researchers

recommend a few best practices. Using compost helps to dilute the soil and reduce the absorption of lead by plants. Carefully washing soil off vegetables before eating them keeps lead in soil particles from being eaten. Placing gardens away from painted walls and heavily trafficked roads reduces the chances of growing food in contaminated soils. Building raised beds with lead-free soil from an outside source is also a good option for those looking to grow their own meals.

As the US population goes up and becomes more concentrated in cities, the distance between mouths to feed and much-needed food continues to grow. With food insecurity on the rise, urban gardening might just be the tool needed to help solve a growing problem.