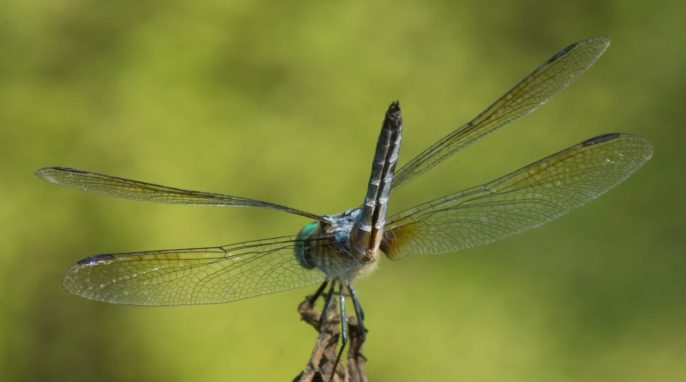 Can kids become citizen scientists and do it well? A team from the North Carolina Museum of Natural Sciences has a program to answer that question.

Picture a scientist. Who comes to mind? I’ll bet they’re at least a college graduate, an adult with expertise, with plenty of research and experience under their belt.

It’s true that professional scientists are people who have accumulated years of specialized expertise in scientific fields, which enables them to focus their research and use advanced tools and data collection methods to achieve goals. But that doesn’t mean science is limited by age or education. In fact, anyone can be a scientist, average citizens included.

Speaking broadly, a scientist is someone who uses the scientific method by making and testing hypotheses, gathering and researching evidence, and contributing to a larger body of knowledge. And while professional scientists have more sophisticated means of pursuing science, citizen scientists can participate in scientific research by collaborating with or learning from the experts. And the best thing about citizen science is that anyone can get involved—even children.

But can children be effective citizen scientists? We know that kids aren’t always the best at following instructions, and that research and data collection often require complex actions and instructions. Adults can surely pay attention and learn the ropes, but kids?

A team from the North Carolina Museum of Natural Sciences have been doing research to answer exactly that question. Christine Goforth, the museum’s head of citizen science, helped design a program called Dragonfly Detectives, which is not only a real citizen science endeavor but also tests whether kids can be effective at research and data collection; whether or not kids can become citizens scientists and do it well. Over the course of the program, which takes place at 22 sites across North Carolina, she learned more than she expected, both about dragonflies and citizen science.

Something about dragonflies makes them fascinating to many types of people, even those who normally find bugs “icky.” Goforth has met people who have had magical, even spiritual, experiences when standing in the midst of a swarm; they’ve recounted tales of seeing dragonflies at gravesites of loved ones and wondered if the insect wasn’t carrying that person’s soul.

“People have this weird relationship with dragonflies that they don’t with a lot of other insects,” she told me. “They’re big and kind of scary for a lot of people, but also beautiful and interesting to watch. They’re one of the most widely accepted insects, in my experience!” The dragonflies provided a great opportunity to watch kids become citizen scientists.

Whether they fascinate, enchant, or disgust you, dragonflies have an important role in their ecosystems. They usually live near water, and they eat other insects that make ponds, lakes, and streams their home, like mosquitos and flies. But they’re also prey for birds, lizards, and even larger insects that live nearby.

Research indicates that dragonfly populations are good indicators of the quality of an ecosystem, as dragonflies and their close cousins, damselflies, are sensitive to pollution and environmental changes. There has been research showing that dragonflies tend to migrate away from areas experiencing temperature increases. Another study shows that in areas strongly affected by climate change, dragonflies react by becoming more selective in where they choose to make their habitats, leading to a decrease in regional diversity. Many experts see the response of dragonflies as a proxy for the future health of aquatic ecosystems.

Dragonfly Detectives is one of three dragonfly-related citizen science initiatives run through the NC Museum of Natural Sciences. This specific program studies how weather affects flight patterns of the Common Whitetail dragonfly, while the other programs tracks dragonfly swarms and dragonfly migration patterns.

The program is offered to fourth through eighth graders at after school care centers and summer camps across the state. Throughout the project’s six-week duration, kids are trained to make hypotheses, collect data, analyze results, and present their findings, just like professional scientists would. They have to learn how to identify different types of dragonflies by their wing patterns and learn how to track dragonfly swarms.

Students quickly discover that mark/recapture is not a useful method for observing dragonfly migration behavior because dragonflies will get irritated and fly away. (Still, the kids love catching them; for many, it’s the first time they’ve seen a dragonfly up close.) Instead, they have to learn other methods of observation, like using a Kestrel weather meter to collect data on wind speed and direction, or how to sit still long enough to watch and count dragonflies without getting distracted.

As the children collected data on dragonflies, Goforth and her associates collected data on the kids. Specifically, they wanted to learn about the participants’ enthusiasm toward science and how effective the kids were at collecting high-quality data. They wanted to watch the kids become citizen scientists. To gauge the enthusiasm of the students, the project leaders ask students to write journal entries every day. They answer questions like “how do you feel about collecting data that will be used in scientific research?”

“Many of the kids report feeling proud or trusted because [they get to collect data] and they all appear to think they’re able to do the data collection well,” explained Goforth. “Because we really emphasize the fact that they’re doing something real and useful, I think they are aware of this all the way through.”

Goforth elaborated on the precision testing: “I know that kids who do dragonfly cit sci programs with me often like to compete to see who can get the most dragonflies recorded on their data sheets. That leads to their making data up, so we get around that by putting the kids in teams of three and having them focus on getting the same counts as their teammates. They get positive reinforcement from the leaders when they get counts that are very close to their teammates, so they’re competing to see which group is the most precise rather than who gets ‘the most.’”

For each of the three tests, children showed improvement over time. On the first day, scores ranged from around 40 to 60 percent for each test, but by the third or fourth day, scores were closer to 90 percent. For tests that were given a third time, there was still greater improvement.

After analyzing the data from 22 Dragonfly Detective sites, Goforth and her team have concluded that kids can absolutely collect high-quality data, as long as they are given thoughtful and realistic expectations. And the more exposure they’re given to the subject they’re supposed to be researching, the better data they’ll collect.

There will still be a learning curve for kids that get involved with science. For example, the students who participated in Dragonfly Detectives had some trouble figuring out the Kestrel; adults had to repeatedly explain the instructions, but there were still kids who didn’t listen. Nonetheless, with patience and supervision, most kids were able to take the measurements accurately.

Surprisingly, kids were very good at making identifications. “By the end of the program, most participants can correctly ID the five species of dragonflies we’re focused on, but they can often name all the others they’ve seen, too.” They can usually tell males and females apart, even when that hasn’t been taught.

The takeaway? Kids can do science, and they like it. Knowing that they’re trusted with something real and important increases their excitement, which may propel them to do a better job. So if you’re planning to participate in a citizen science project, get your kids involved—you never know how big a contribution they can make.

Featured image: Blue Dasher Dragonfly. All photos are courtesy of Christine Goforth from the North Carolina Museum of Natural Sciences.