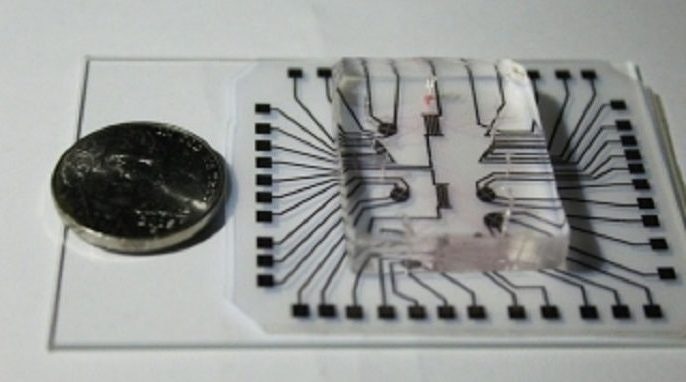 Scientists have developed a reusable lab on a chip (LOC) that can be printed using an inkjet printer at an unprecedented cost of one cent.

Scientists have developed a reusable lab on a chip (LOC) that can be printed using an inkjet printer at an unprecedented cost of one cent. This biochip has the potential to revolutionize health care in developing countries by allowing for the early diagnosis and treatment of diseases such as HIV, malaria, tuberculosis, and cancer. Using small samples, the LOC platform can be used to rapidly detect such diseases by isolating and characterizing rare cells and molecules.

Poor access to early diagnostic equipment results in increased breast cancer mortality. Breast cancer survival rates of patients in developing nations are half the rate of patients living in developed countries. Early detection can greatly improve survival rates. One of the main obstacles preventing access to early detection diagnostics in low-income nations is the high cost.

“Maybe one dollar in the US doesn’t count that much, but somewhere in the developing world, it’s a lot of money,” says Dr. Rahim Esfandyarpour, lead author of the study and engineering research associate at the Stanford University School of Medicine.

Other biochips are not able to perform all processes necessary for a diagnosis, such as cell manipulation, separation, and analysis. Reducing the costs involves achieving full integration of these processes. The biochip consists of two parts: a clear silicone microfluidic disposable chamber and a flexible polyester reusable electrical strip. Samples are applied inside the chamber, which is aligned on top of the electrical strip. The electrical apparatus on the strip is printed using an inkjet printer with conductive nanoparticle ink, which is commercially available.

Since the sample is housed in a separate disposable component, it does not have any contact with the electronic strip, allowing for unlimited use and also eliminating cross-contamination.

Cells and bioparticles are not labeled, but instead detected using their electrical properties. Labeling or tagging cells using fluorescent or magnetic labels is a lengthy process with many steps involved, sometimes changing the intrinsic properties of the cells. This biochip platform detects and separates cells according to their intrinsic size, shape, and polarizability, using an electrical field in a process known as dielectrophoresis. In this process an electrical potential is applied and a force is exerted on the cells or bioparticles, moving them in different directions based on their polarizability. After processing, the separated cells can be collected for further detailed analysis.

The biochip has the ability to perform a wide range of functions such as single-cell quantification, rare-cell isolation, selective separation, sorting, aligning, and positioning. Different designs can be printed to perform different functions. Esfandyarpour’s team tested the biochip by separating a mixture of breast cancer cells, yeast cells, and polystyrene microspheres, each possessing different polarization abilities. The results showed the biochip was able to separate them with efficiencies ranging from 79 to 86 percent. Normally, cells would first need to be labeled and then counted and sorted using a flow cytometer machine, which costs $100,000, excluding any maintenance costs.

RELATED: DIALING IN BLOOD TESTS WITH A SMARTPHONE

This point-of-care diagnostic platform eliminates the need for highly trained personnel, expensive equipment, and clean-room facilities, all of which are required for production of biochips. In addition to these requirements, the procedures involved in integrating the electronic apparatus on chips are lengthy, sometimes taking weeks, which add to the cost. In contrast, this biochip takes only 20 minutes to print.

Much as low-cost genome sequencing revolutionized medical diagnostics, the team believes this biochip can revolutionize the way diseases are diagnosed—in both developing and developed countries. “The genome project has changed the way an awful lot of medicine is done, and we want to continue that with all sorts of other technology that are just really inexpensive and accessible,” says Ron Davis, senior author of the study.