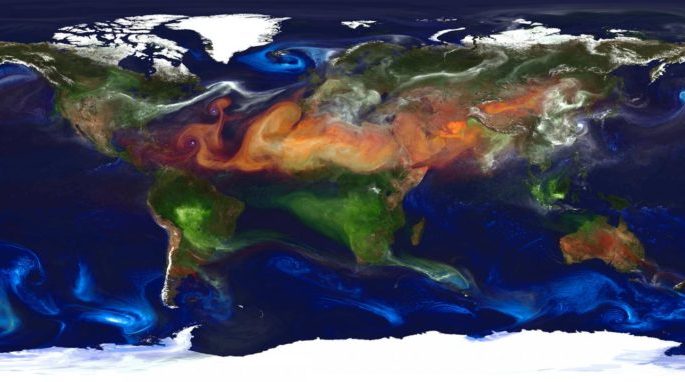 A new study out of the University of Georgia could help predict blooms of a common but deadly type of marine bacteria and change the way we view some the planet’s most important environmental processes. The genus Vibrio includes the bacteria that cause cholera. It can also cause gastroenteritis from shellfish consumption and wound infections from seawater in humans, as well as diseases in marine organisms.

Dubbed “opportunitrophs,” the bacteria are known for their ability to reproduce and adapt to changes quickly. “Part of what makes these normal marine bacteria also potentially pathogenic is their ability to grow quickly when conditions are favorable, whether in a host or in the environment,” says study coauthor Erin Lipp, a professor of environmental health science at the UGA College of Public Health.

Iron in the world’s oceans plays a key role in many biogeochemical processes. These include the cycling of carbon from Earth’s atmosphere. Iron limits the growth of phytoplankton. Because phytoplankton makes up the base of the ocean’s food web and acts as a large sponge-like carbon sink for the planet, scientists are interested in learning more about how phytoplankton and other marine microbes process nutrients such as iron. One of the biggest sources of iron that feeds these marine processes are the massive dust storms that originate in the Sahara Desert. These clouds of dust cross the ocean on the easterly trade winds and are deposited in the waters off of North America.

Researchers believe that influxes of dust blowing in from the Sahara could be the cause of an increasing number of outbreaks of Vibrio in the Caribbean and South Atlantic. Normally, Vibrio only makes up a small part of the total population of marine microbes. Their growth is limited by the amount of iron in the water. When excess iron is present, however, Vibrio thrive due to their ability to metabolize the element more quickly than other competing microbes. Excess iron is present in the waters where Vibrio is most commonly found only in the summer, when dust storms bring clouds of iron-rich African soil across the ocean and deposit them in the waters off of North America.

[tweetthis]Dust storms from the Sahara could be causing Vibrio outbreaks.[/tweetthis]

To test their hypothesis, researchers took samples of Saharan dust collected in Morocco and added the dust in varying amounts to tanks of seawater collected near the Florida Keys. They then measured the growth of the Vibrio population in response to the additional iron.

The Vibrio started growing within 24 hours and increased rapidly. After seeing significant growth of marine bacteria, the scientists were able to continue their testing in a real-world scenario. The arrival of Saharan dust in the Caribbean and South Atlantic is a fairly predictable yearly occurrence, so they simply waited until the summer months and collected water samples both before and after the dust events.

They isolated the Vibrio and counted the population in water samples collected from the Florida Keys and Barbados. The response of the bacteria to the dust was dramatic. Within 24 hours of exposure to the iron, the number of bacteria had increased by almost 30 times, from 1 percent of the total microbes in the water to over 20 percent.

These results challenge the idea that phytoplankton are the marine microbes that can process iron the fastest. Scientists have previously considered seeding the oceans with iron to speed up phytoplankton growth. This addition would have increased the potential for carbon absorption from the atmosphere. However, these new findings suggest that this strategy for slowing down or possibly even reversing the effects of climate change could be not only ineffective, but could also have serious consequences.

Researchers speculate that rising sea surface temperatures coupled with more desertification in the Sahara could create a perfect storm for an increase of dangerous Vibrio outbreaks. “Knowing the connection between Saharan dust and Vibrio population blooms is significant from the perspective that we are able to track these dust events using satellites in real time,” says lead study author Jason Westrich, a postdoctoral research associate in the College of Public Health. “This allows some predictive power to understand when there is an increased risk for Vibrio infection in humans and other marine organisms.”

Emily is freelance writer and blogger whose training and passions lie at the intersection of science and education. She has worked as an outdoor environmental educator, a science teacher, and a professional communicator and trainer. You can read her blog on serious science in a not-so-serious style at www.riseandsci.com.