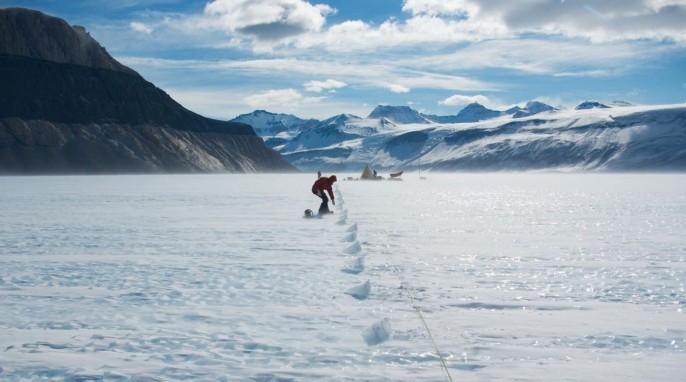 Our planet has been going through glacial periods for ages. What does that mean for land carbon and carbon dioxide in the atmosphere?

During the ice ages, ice sheets covered large parts of the Earth, unlike today, when ice sheets are found only at the poles. Our planet has been going through cycles of glacial periods (which are actually shorter periods within an ice age) featuring colder temperatures, and interglacial periods, characterized by a warmer climate, for hundreds of thousands of years.

The last deglaciation, when the Earth moved out of the glacial period, began around 20,000 years ago. At that time, carbon dioxide in the atmosphere began to rise and warm our planet by an increased greenhouse effect. Now, a new study from Antarctica shows that during that time abrupt increases in carbon dioxide in the atmosphere came from land sources, not only from the ocean as scientists had believed.

What Caused the Last Deglaciation?

One of the main factors that drove the last deglaciation period—from 20,000 to 10,000 years ago—was a change in Earth’s orbit that increased the level of solar radiation reaching the Earth during summers. The other driving factor was a rise in carbon dioxide levels in the atmosphere, which rose by about 75 parts per million (ppm). There was a corresponding rise in global temperatures of about 3.5 degrees Celsius, as well as a rise in sea levels of 130 meters, due to the melting of ice sheets.

Until now, the origin of that carbon dioxide was unclear, as was what caused carbon dioxide levels to rise in the first place. “This has emerged as one of the big mysteries in paleoclimate science over the last few decades,” says Thomas Bauska, lead researcher of the study, from Oregon State University and now a postdoctoral researcher at the University of Cambridge, UK. Most scientists believe the carbon dioxide came from the ocean surrounding Antarctica, called the Southern Ocean.

The Antarctic ice sheet covers an area larger than the US and India combined. Snow falls each year on ice sheets at the poles and eventually gets compressed into ice. Tiny air pockets in the ice contain bubbles of trapped ancient air that can supply a wealth of information about the climate of thousands of years ago. Air bubbles from ice cores can show how carbon dioxide levels changed in our atmosphere during the last deglaciation, as well as its likely source.

To find out the sources of carbon dioxide, scientists measured the ratio of stable carbon isotopes, specifically the ratio of the isotopes carbon-13 to carbon-12, in air samples from ice deposited 22,000 to 11,000 years ago. Carbon from different sources has different isotopic “fingerprints.” Bauska and his team developed a device that allowed them to use large ice samples, which in turn enabled them to use a type of mass spectrometry that measures the ratios more precisely. The team’s device, known as the “cheese grater,” shaves off thin layers of ice from the samples. “We then sample the air released from the bubbles and measure the concentration of gases and their isotopic ratios,” Bauska explained to GotScience.org.

Extracting ice samples from previously drilled ice cores is tricky because the samples are very large, says Bauska. But the study was made possible when Bauska’s team fortunately discovered a section of ice on the surface of a glacier called Taylor Glacier in Antarctica where older, deeper ice was outcropped, making sampling easier.

The team learned that during the deglacial period the rise in atmospheric carbon dioxide occurred gradually in a series of steps, with each step caused by different mechanisms and sources. During the initial phase of deglaciation, which lasted about two thousand years (from 17,600 to 15,500 years ago), carbon dioxide increased by about 35 ppm. This was characterized by a decrease in the carbon isotope ratio, which signaled that the carbon dioxide came mostly from oceanic sources, confirming what scientists had believed. In particular, the increased carbon dioxide was attributed to a weakened state of the ocean’s biological pump. The biological pump is a process in which the ocean removes carbon dioxide from the atmosphere and transports it deep into the water. Microscopic marine organisms called phytoplankton, living on the surface, take up the carbon dioxide for photosynthesis. During photosynthesis, they use the carbon dioxide to make carbohydrates and other organic compounds. The phytoplankton clump together and sink to the ocean floor, carrying the carbon (which originally came from the atmosphere) deep into the ocean. The biological pump can be weakened due to a decrease in the transport of carbon into the deep ocean.

“Quite a large portion of the CO₂ that is stored in the ocean is exhaled and inhaled around Antarctica,” explains Bauska. Large areas of sea ice during the glacial period blocked CO₂, which would have built up in the deep ocean. “If this barrier is suddenly lifted, CO₂ would escape back into the atmosphere.”

“The bulk of the CO₂ rise is still probably sourced from the ocean. The land carbon events might just be bumps along the way. However, they are very interesting because they might be telling us how sensitive the land carbon cycle is to abrupt changes in climate.”

Interestingly, the first time of rapidly rising carbon dioxide levels (16,300 years ago) coincided with a period of drought in the region that is now China. “This may be telling us that large-scale droughts can cause rapid losses of carbon stored on land,” says Bauska. At the same time, there was a small but rapid increase in methane, which may have come from rising wetlands in the southern hemisphere.

Two additional times when carbon dioxide in the atmosphere rose considerably, around 14,600 and 11,500 years ago, point to a combination of carbon sources, including rising surface ocean temperatures. These findings can help climatologists predict future climate, particularly how such events can amplify climate change caused by human activities.

This study was published in the journal Proceedings of the National Academy of Sciences (PNAS).