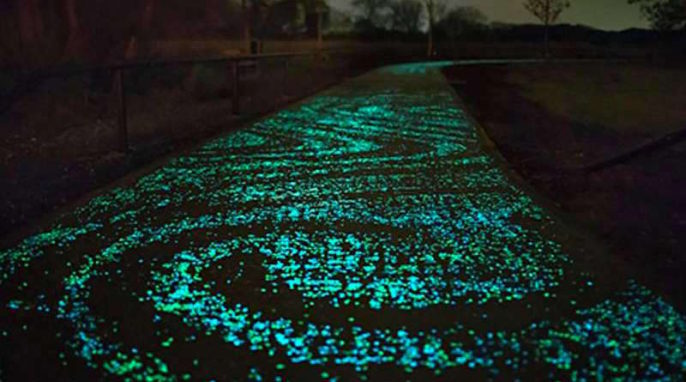 Imagine a future when, as dusk turns to night during a long drive, the darkening highway begins to glow in soft hues of blue and green to illuminate the path ahead. Such a possibility could become reality after the creation of light-emitting cement by Jose Carlos Rubio at the University of San Nicolas Hidalgo in Mexico. The novel material could provide lighted pathways for cars, trucks, bikes, and pedestrians without using electricity.

Most developed countries now rely on vast networks of roads to allow for fast transportation between cities. The US highway system consists of over 160,000 miles of road that web across the country, and most of these roads require some type of lighting for nighttime drivers. In the United States alone, lighting for buildings and for public use uses 262 billion kilowatt-hours (kWh) annually, or about 19 percent of all commercial electricity consumption. China’s highway network will grow to a similar size by 2030 and demand similar lighting requirements.

As the looming shadow of climate change pressures society to move toward renewable energy, finding a low-carbon and energy-efficient method to light highways could significantly reduce energy consumption. At the same time, global cement production is nearing 4 billion tons; energy-efficient highway lighting introduces a giant commercial market that would reward entrepreneurs with new and useful technology.

Nine years ago, Professor Rubio recognized the need for energy-efficient road lighting. His solution was to create cement that absorbs solar energy during the day and emits it at night. In effect, his goal was to develop a road and lighting system contained in one material. “When I started the project, I realized there was nothing similar worldwide and so I started to work on it,” Rubio says. “The main issue was that cement is an opaque body that doesn’t allow the pass of light to its interior.”

This opaqueness problem stems from traditional methods of manufacturing cement. Normally, cement begins as dust that is mixed with water to create a substance similar to hair gel. This gel eventually hardens within the mix of materials used to create the hundreds of thousands of miles of concrete roads seen today. However, this process also creates crystal flakes in the gel that block incoming sunlight.

Professor Rubio’s nine-year journey of experimenting with the cement microstructure culminated in a new material that completely eliminates these crystal flakes. Without these flakes, incoming light can penetrate into and be absorbed by the deepest parts of the concrete. At the same time, the material is phosphorescent, meaning that it absorbs the solar energy and later releases it as light. During the day, the cement essentially acts as an energy storage device, soaking up all the sunlight and exciting electrons in the material. At night, these electrons eventually relax to their original state, emitting light in the process. Once night falls, the cement can provide light for 12 hours, without using any electricity.

The benefits of this light-emitting, phosphorescent concrete go beyond its electricity independence. Most synthetic phosphorescent materials are made of plastics. These materials are composed of organic substances that break down over long-term exposure to UV rays, usually within about three years. In contrast, cement is only made of sand, dust, or clay, and boasts a lifespan nearing a century.

The simple composition of cement also makes it quite environmentally friendly. Resources such as sand are readily available, and the only manufacturing waste is water steam. Perhaps unsurprisingly, a material with this many benefits has attracted global attention. “Due to this patent, others have surfaced worldwide,” Rubio says. “In the UK, we received recognition from the Newton fund, given by the Royal Engineering Academy of London, which chooses global success cases in technology and entrepreneurship.”

Phosphorescent concrete will not be lighting up a highway near you anytime soon, though. Though the basic research has shown great promise, the next step will involve technology transfer to commercialization and large-scale manufacturing. However, with this material’s numerous environmental benefits, the highways of the future could be shining beacons of technological innovation during an age in desperate need of energy solutions.

Phys.org. “Looking to light highways with light-emitting cement.” Accessed May 17, 2016.