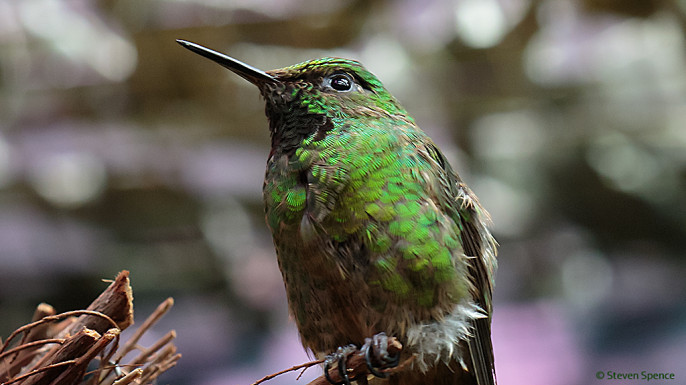 Are you wondering how a hummingbird flies? The flight skills of these tiny birds put our airplanes and helicopters to shame.

Dancing in the Air

A hummingbird puts fixed-wing aircraft and helicopters to shame. Not only can it hover, it can also fly forward, backwards, sideways, and even upside down! During a mating display, the male Anna’s Hummingbird can accelerate up to 385 body lengths (g-force 10) per second during a dive. A Peregrine falcon dives at only 200 body lengths per second, and a Mig-25 fighter jet dives a mere 40 times its length.

Hovering birds use a “figure 8” wing motion. Wind tunnel studies have shown 75 percent of the bird’s lift is generated on the downstroke and only 25 percent on the upstroke. The Giant hummingbird beats its wings twelve times per second, but the wings of smaller varieties beat up to 50 times per second.

A key factor in their divergence from swifts was an altered taste receptor, which attracted them to nectar. In fact hummingbirds and some ornithophilous (“bird loving”) plants have co-evolved. Plants pollinated by hummingbirds produce flowers in shades of red, orange, and bright pink. The birds can see these colors well, whereas many insect pollinators are attracted by markings and colorations in the ultraviolet range. Because the birds and insects react to different color ranges, competition between them for the nectar is reduced. The ornithophilous plants benefit by being primarily pollinated by hummingbirds. Wild hummingbirds in the tropics may visit up to 1000 flowers in a day, ensuring pollen is spread widely.

Hummingbirds are generally small. The thumb-sized Bee Hummingbird (Mellisuga helenae ) is only 6cm long, making it the smallest bird in the world. At the other extreme for hummingbirds is the Giant Hummingbird (Patagona gigas) with a beak to tail length of 23cm. Similar sized birds are starlings and northern cardinals.

With the exception of insects, hummingbirds have the highest metabolism of all animals while flying. Their heart rate can reach as high as 21 beats per second. Hummingbirds breathe 4 times per second and consume more than their own weight in nectar each day. To get to the nectar deep in the flowers, the birds have a long beak and an even longer tongue.

At night or when food is scarce, these birds can slow their metabolism dramatically. Their body temperature drops from 40°C to 18°C, while their heart rate falls to 1 beat per second, and their breathing slows down correspondingly.

Although a hummingbird has a sweet tooth, it does need other sources of food. A balanced diet includes insects and spiders, both of which provide protein and other nutrients.

Despite their high metabolism and living at a fast pace, these tiny birds may live up to five years. Several have been documented as living for more than 10 years. The oldest was captured and tagged as an adult (i.e. more than 1 year old) and recaptured 11 years later, making it at least 12 years old.

Many species have very bright plumage with exotic coloration. The coloration does not come from pigmentation alone, but from cell structures that refract light in a manner similar to a prism. Iridescent birds rely on a combination of refraction and pigmentation to give their feathers color.

RELATED: HOW TO DISRUPT A HUMMINGBIRD’S HOVER