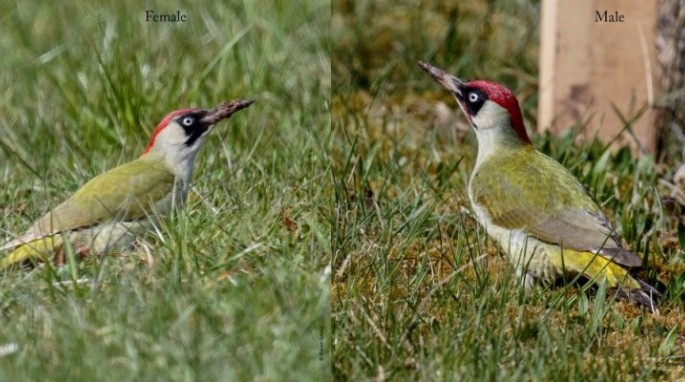 “Yaffle” was one of the English folk names given to the European green woodpecker (German Grünspecht; Latin Picus viridis) due to its distinctive, laughing call.

The European green woodpecker spends most of its time foraging on the ground instead of pecking holes in trees as most other woodpecker species do. The bird primarily eats ants because its tongue is well adapted for this, being 10cm long and sticky (see this short video for a view of the bird’s impressive tongue). This woodpecker’s tongue is so long, in fact, that it wraps around the bird’s brain when retracted. The European green woodpecker will eat other insects, especially flies, mosquitoes and spiders, and will also occasionally eat rowan berries, cherries, apples, or grapes.

The European green woodpecker prefers semi-open landscapes, especially the edges of woodlands, hedges, orchards, parks, and large gardens with mature trees. It shows a strong preference for areas with a majority of deciduous trees and, therefore, in primarily coniferous areas it is rare to encounter one. Having a wide distribution in Europe, the European green woodpecker has an estimated population of 860,000 breeding pairs, which are territorial and rarely move more than 500m between breeding seasons.

One of the reasons that the Grünspecht was chosen as Germany’s “Bird of the Year” in 2014 is that it has a strong affinity for the habitat of mixed orchards (Streuobstwiesen). While the commercial production of fruit is easier on a plantation, biodiversity is lower than in mixed orchards. The grass in these mixed orchards is mowed usually only twice a year, which contributes to them having a high density of ants and, in turn, makes the mixed orchards very attractive to the European green woodpeckers. Additionally, the trees found in mixed orchards are typically much taller and older than those on fruit plantations, and they often have hollows that provide perfect nesting locations. An informative German-language video can be viewed here.

If you love birds, don’t miss this wild red kite on the wing, or the secret to disrupting a hummingbird’s hover.

My photos  show a pair of European green woodpeckers, which I found in an orchard near Herrenberg, Germany. As you can see, the male and female are quite similar. The male has a red stripe near the beak whereas the female has all black coloration.