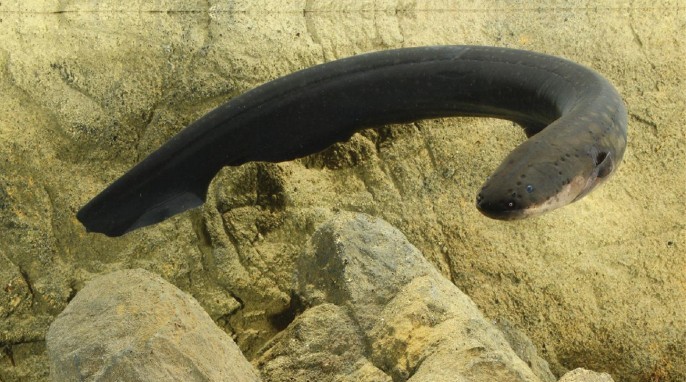 The electric eel is an Amazonian fish that can deliver an electrical jolt strong enough to stun a horse, using an electroshock system similar to a Taser.

It may look like an aquatic snake, but this eel is actually a fish that packs an electrical punch. Thanks to a study from Vanderbilt University, we understand how this animal hunts with electricity.

A Brief History of the Electric Eel

Historical references tell us that the ancient Egyptians used electric fish to deliver shocks for the treatment of epilepsy. Galvanism, pioneered in the eighteenth century by Luigi Galvini, scientifically explored the existence of “animal electricity.” His work inspired Mary Shelley’s Frankenstein, as well as a generation of scientists including Michael Faraday (1791-1867), who used electric eels to further investigate the nature of electricity. Electric eel anatomy even inspired Alessandro Volta (1745-1827) to create the first battery. More recently, scientists at the University of Wisconsin-Madison announced that they had sequenced the complete electric eel genome.

The electric eel uses high-voltage electrical discharges to locate and incapacitate its prey. Biologists have determined that a six-foot electric eel can generate about 600 volts of electricity, which is five times that of a standard domestic U.S. electrical outlet. Until now, however, how the eel’s electroshock system actually works has been unclear.

Kenneth Catania, professor of biological sciences at Vanderbilt University, has been working toward a better understanding of the electric eel. He has discovered that electric eels are incredibly fast. They can strike and then swallow a small fish in about one tenth of a second.

Furthermore, the eels produce at least three different kinds of electrical discharge: low-voltage pulses for checking out the environment; short sequences of two or three high-voltage millisecond pulses (called doublets or triplets) given off while hunting; and volleys of powerful and fast pulses when capturing prey or defending themselves from attack.

The electric eel begins its attack on free-swimming prey with a high-frequency volley of high-voltage pulses about 10 to 15 milliseconds before it strikes. “It’s amazing. The eel can totally inactivate its prey in just three milliseconds. The fish are completely paralyzed,” says Catania. This paralysis is temporary, so the eel has to eat its meal before the fish wakes up and swims away.

So, how does it work?

Large electric eels are significantly more powerful than a standard-issue Taser, but as the video shows, they involve similar principles. The Taser works by overwhelming the nerves that control the muscles, causing them to involuntarily contract. According to the research, the electric eel also impairs the body’s motor neurons. But while a Taser delivers 19 high-voltage pulses per second, an electric eel can produce 400 pulses per second.

The eel has poor eyesight and often hunts hidden prey, so it uses lower voltage electric bursts to find out if there is any food around. Rapidly firing low-voltage electricity  causes the muscles of any concealed animals nearby to contract and release, resulting in movement in the surrounding water which can be detected by the eel.

“Normally, you or I or any other animal can’t cause all of the muscles in our body to contract at the same time. However, that is just what the eel can cause with this signal,” Catania explains. “If you take a step back and think about it, what the eel can do is extremely remarkable. It can use its electrical system to take remote control of its prey’s body. If a fish is hiding nearby, the eel can force it to twitch, giving away its location, and if the eel is ready to capture a fish, it can paralyze it so it can’t escape.”

RELATED: Even the Resilient Tardigrade Has an Achilles Heel

This research was conducted by Vanderbilt University Stevenson Professor of Biological Sciences Kenneth Catania and is described in the article, “The shocking predatory strike of the electric eel,” published in the journal Science. The research was funded by a Pradel Award from the National Academy of Sciences, a Guggenheim fellowship, and a grant from the National Science Foundation.