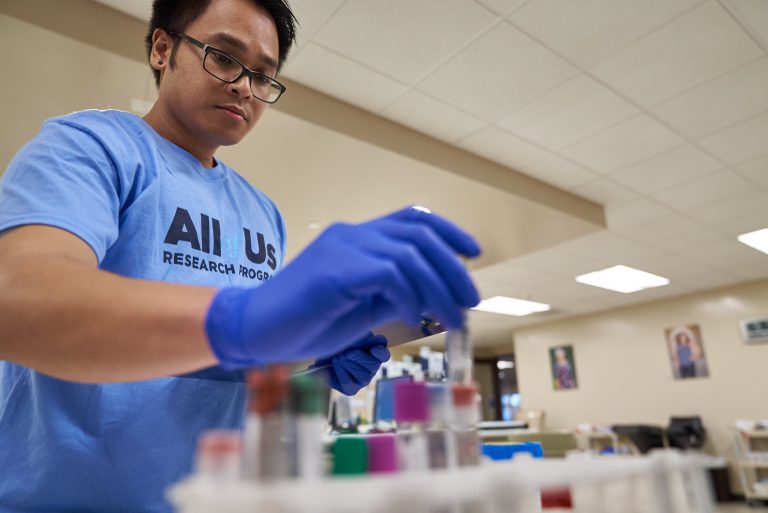 The future of individualized medicine may depend on an army of one million volunteers. And scientists want you to get involved.

Researchers with the National Institutes of Health are recruiting citizen scientists to enlist in a study of unprecedented scope and depth. The program, called All of Us, promises to take personal data from a diverse cross-section of volunteers and turn it into groundbreaking insights about the complex roles our genes, lifestyles and environments play in our health.

“By studying people longitudinally over time, we’re able to see diseases arise,” says Sheri Schully, the All of Us program’s acting chief medical and scientific officer.

In return for completing surveys and offering up biological samples, the program will send participants personalized results about everything from their ancestry to their genetic predisposition for certain diseases. It’s also free to join.

And last month, All of Us sent participants back the first set of genetic results.

Take Part: Join the National Institutes of Health’s All of Us Program

‘The Right Treatment at the Right Time’

In January of 2015, President Barack Obama stood before the country during the State of the Union and offered a bold vision for accelerating research. A research program then called the Precision Medicine Initiative would recruit at least one million people from across the United States and study them, leading to rapid advances in drug discovery and customized treatments for patients based on personal data.

“I want the country that eliminated polio and mapped the human genome to lead a new era of medicine — one that delivers the right treatment at the right time,” Obama told the nation. He added that the project could bring us closer to curing diseases like cancer and diabetes, while offering people access to personal information that could help them stay healthy.

Five years later, NIH has already enrolled hundreds of thousands of participants, and last month, those volunteers started receiving the first results from their genetic samples. But the project still has a long way to go to reach one million people. And with the approach of Citizen Science Month in April, they’re calling on volunteers from around the country to get involved in not only All of Us, but also a group of featured citizen science projects and events produced with global and national partners like SciStarter, Arizona State University, Science Friday and National Geographic in a grand scheme to revolutionize medicine.

“The power of citizen science is the massive impact that is made by everyday people, individually and collectively,” said Darlene Cavalier, founder of SciStarter and a professor of practice at the School for the Future of Innovation in Society at Arizona State University. “Online and virtual events during Citizen Science Month will help introduce thousands of people to citizen science and help them find ways to act upon issues they are curious or concerned about, individually or as a community.”

Participants in All of Us start by taking a survey about their lifestyle, family history and more. Then, they can agree to share their health records with researchers and offer up blood and urine samples, as well as physical measurements like height, weight and heart rate. Participants can even share daily personal health data from smart devices like a Fitbit.

The data is stripped of all personal identifiers, but this granular level of detail, when monitored over time, can give researchers a real-time look at the ways diseases arise.

It’s all part of what researchers call precision medicine. Precision medicine stands in contrast to the current one-size-fits-all approach to disease treatment used by doctors around the world. But if medical professionals could better understand their patients at an individual level, doctors could predict the best possible treatment for a particular disease.

“[Precision medicine] is understanding what a person is experiencing and what’s going on inside and outside their body in relation to disease,” Schully says. “It’s really evaluating a person holistically. What are they eating? What’s their lifestyle like? And what kind of job do they have? Precision medicine to us doesn’t just mean targeted treatment, it means targeted prevention.”

A Holistic Look at COVID’s Impact

Researchers are already studying the database. And it’s even giving them new insights into COVID-19. Back before the pandemic started, All of Us was enrolling about 3,000 people every week. Eventually, the coronavirus forced them to temporarily pause that enrollment. But when researchers went back and studied the 24,000 blood samples they’d collected between late 2019 and early 2020, they found some surprises.

At the time, researchers didn’t know COVID-19 was spreading in communities around the country. Yet a significant number of the blood samples All of Us collected showed signs of COVID-19 antibodies, meaning that the disease was spreading in many states well before health officials realized. Researchers with the project will soon publish those results in the New England Journal of Medicine.

Meanwhile, All of Us has also been asking participants about COVID symptoms via a survey sent out last May. The survey included broad COVID-related questions, including inquiries about people’s mental well-being and whether they’d lost their job. The initial results of that work were released to researchers in December, and they offer a detailed look at how COVID is affecting families and communities. Among other things, All of Us heard back that people are suffering long-term heart defects and breathing effects, problems that medical professionals have seen elsewhere. Armed with this data, the program hopes they can monitor these lingering health problems over time in an effort to revolutionize medicine and the way we all approach public health. It’s a sort of holistic look that has been part of the program’s mission since the start.

Other large projects have collected genetic databases aimed at advancing disease diagnosis and treatment, but All of Us stands out for its staggering size and its mission. Researchers aren’t just studying people’s DNA, All of Us is putting its participants at the epicenter of their program. The community helps make decisions, with volunteers even sitting on governing boards, deciding how data can be used.

If aiming to revolutionize medicine wasn’t lofty enough, All of Us is also after a diverse cross-section of the American public, including people from diverse ethnic and economic backgrounds, as well as a mix of rural and urban residents. That’s something other studies have long struggled with. The project’s leaders say that most of modern medicine has been biased toward studying people with European ancestry, leaving other segments of the population underrepresented in research.

And as an incentive to get one million people involved in this effort to revolutionize medicine, the project will also share genetic information with its participants, including things like ancestry and whether they’re at an increased risk for disease.

“Never before have we really put the participant at the center of the study and really valued the back and forth, giving them what matters to them,” Schully says. “We really want to be a catalyst for change in how things are done in science.”

In December, they started returning those first individual ancestry and genetic trait results to volunteers.

“Participants are our most important partners in this effort, and we know many of them are eager to get their genetic results and learn about the science they’re making possible,” All of Us chief executive officer Josh Denny said in an announcement. “We’re working to provide that valuable information in a responsible way.”

Later this year, All of Us plans to start telling interested participants about how their DNA could affect their body’s response to certain drugs, or even about genes that could increase their risk of a variety of diseases like cancer. Those results will be paired with counseling to help people understand the implications of their DNA profile. And, like everything with the program, the personal data will be tightly protected.

“It’s a huge milestone for our project,” Schully says. “Returning results on this level has never been done before.”

And people who get involved throughout the year — including during Citizen Science Month — can look forward to learning more about their family’s ancestry and genetic predispositions. Citizen Science Month is all about turning curiosity into impact, and what better way than with a project that could help you better understand yourself while helping researchers better understand human health at large?

You can join the All of Us program and help revolutionize medicine by visiting joinallofus.org/nlm.