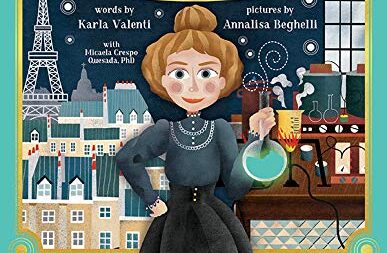 My Super Science Heroes, a new series authored by Karla Valenti, introduces children to the world’s most impactful scientists, starting with Marie Curie and Alan Turing.

Hunting for answers to humanity’s most important questions, scientists have the fascinating job of figuring out what makes the world tick. But have you ever wondered what makes a scientist tick? What kinds of people go on to study science? What kinds of skills are helpful when trying to answer tough questions?

My Super Science Heroes, a new series of children’s stories by author Karla Valenti, explores the backgrounds and personalities of some of the world’s most impactful scientists in a unique and fun-to-read manner that’s sure to captivate any budding researcher. Valenti–alongside the intricate illustrations of Annalisa Beghelli–kicks off the series by featuring chemist Marie Curie and mathematician Alan Turing.

Marie Curie Says “Yes, I Can”

Marie Curie was interested in science during a time when women weren’t expected, or even allowed, to have such interests. This version of her story starts from the very beginning when Curie was born in Warsaw, Poland to two teachers. Meanwhile, Super Evil Nemesis–a dark force plotting to encourage ignorance and fear in the world, alongside a drove of minions in a far-off cave–learns of Curie’s arrival and her budding scientific superpowers as she grows. Nemesis hopes to place roadblocks in Curie’s path wherever possible and sends out the perfect minion for the job: Mr. Opposition.

The story chronicles the difficulties Curie faced in pursuing a career in science, from her father’s unemployment and the family’s lack of money for her studies, to being denied a place in Polish universities because of her gender, to experiencing poverty in Paris while she began her career. But at every turn, she thwarts Mr. Opposition and becomes the groundbreaking researcher we know her as today.

Through deft storytelling and colorful details, Marie Curie and the Power of Persistence covers more than just dates and facts. It’s a biography laced with whimsy and flair to help children understand the challenges and thought processes of a famous scientist. It hints at various ways poverty can hinder bright, capable people full of potential and it addresses harmful gender barriers, which are still in place today for many women worldwide. Through this tale of triumph, children will not only learn facts about Curie, but will hopefully be inspired by her confidence and can-do approach to every obstacle she overcame.

Similar to Marie Curie’s story, Alan Turing and the Power of Curiosity (the second My Super Science Heroes book) starts off with a brand-new baby scientist on the scene–this time in London, England. Of course, Nemesis wants to keep young Turing from learning and assigns an evil minion to him: the four-legged Ms. Enigma. She tries her best to hinder him in school but inadvertently encourages Turing to become an expert problem-solver.

When Turing is an adult and publishes a paper on machines that use special instructions to solve math problems, Ms. Enigma begins placing secret codes around the young scientist’s environment. But instead of becoming confused, Turing ends up having even more breakthroughs–so many, in fact, that he becomes an expert code-breaker during World War II. From there, he conducts even more research on other big questions he has, such as whether machines can think for themselves, or how organisms develop patterns like spots and stripes. Turing’s inquisitive mind is unstoppable and eventually leads to devices most people encounter every day in the 21st century, like calculators and computers.

Much like the story of Marie Curie, this tale does more than recite facts and figures. There are plenty of opportunities to practice code-breaking at the end of the book, as well as a handy glossary for some of the more complex ideas in Turing’s work. There are also strange words sprinkled throughout the story (no doubt put there by Ms. Enigma). These, of course, are confusing at first, but young readers may be tempted to channel Turing’s relentless curiosity and ask, “What do these mean? How do these work?” and soon be on their way to tackling challenges with open minds and their own curiosity-fueled superpowers.

My Super Science Heroes Delivers Powerful Lessons (Even Beyond Science!)

In addition to being packed with biographical information and detailed illustrations, My Super Science Heroes drives home some of the qualities behind successful scientists. The books show young readers that just because we encounter problems doesn’t mean we have to let them get in the way of our goals, or of what we believe is right. And through the colorful, entertaining personification of problems like Mr. Opposition and Ms. Enigma, the stories show that scientists and science-minded people sometimes go beyond simply defeating their challenges. Sometimes, they may even come to befriend them.

Mackenzie Myers Fowler is a science writer, native Michigander, and former field station ragamuffin. She holds an MFA in nonfiction writing but would be a soil scientist if she could do it all over again. She lives in Michigan with her husband, her cat and a plethora of houseplants.