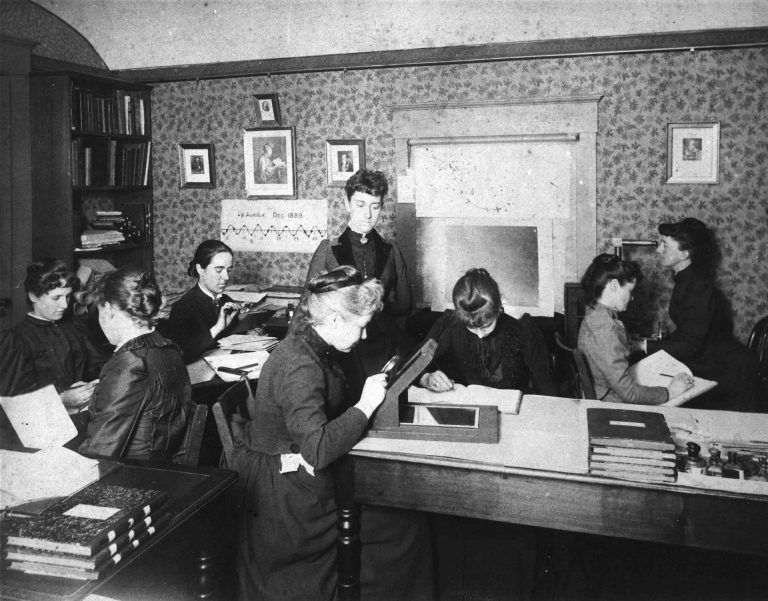 More than a century ago, women called “human computers” changed our understanding of the universe. Now volunteers are making discoveries in their old notebooks.

More than 100 years ago, Harvard astronomer Edward Charles Pickering decided he was going to take a picture of the entire night sky. Or, rather, many thousands of pictures, each capturing a tiny rectangle of the universe as seen through a telescope. Today, these photos survive on hundreds of thousands of glass plates at the Harvard College Observatory, the oldest comprehensive record of the cosmos.

Though it was Pickering’s idea, the actual work of studying these photographs was done by a group of women known as the Harvard Computers. Before the days of silicon and circuits, actual humans known as “human computers” performed the laborious mathematical endeavor of physics and astronomy.

“Someone had to go look at every plate covered in thousands of little stars, and they had to look at every star on that plate and catalog it,” says Daina Bouquin, head librarian at the Harvard-Smithsonian Center for Astrophysics. “So this team of women, over the course of a couple of decades, basically analyzed and created the first all-sky catalog.”

Like the women memorialized in the movie “Hidden Figures,” the Harvard human computers toiled in relative obscurity, yet they produced groundbreaking work fundamental to the field of astronomy. Women like Henrietta Swan Leavitt and Annie Jump Cannon produced some of the first rigorous examinations of the motion and brightness of stars. Today that data is foundational to our understanding of the basic structure of the universe.

“In the late 1800s and early 1900s, astronomy was undergoing a revolution,” Bouquin says. “We were shifting from mapping the sky and what we see and trying to describe it, to trying to understand the physics of the sky. How does it work?”

Now Bouquin is leading an initiative known as Project PHaEDRA. Its goal is to digitize and catalog those decades of work from the Harvard human computers.

RELATED: Uncovering the Secrets of the Egyptian Geniza With Citizen Science

But the collection of notebooks is far too extensive for researchers to manage alone. So, the project relies on thousands of volunteers to help comb through decades of invaluable astronomical observations and turn them into something usable for researchers today. Citizen scientists can get involved with Project PHaEDRA from anywhere in the world — all you need is a computer.

Volunteers transcribe notebook pages from astronomers that have been languishing in obscurity for decades and add them to a growing collection of searchable data in a NASA archive. These historic observations are sought after by scientists today, who are continuing the work the computers started.

Take Part: Get involved with Project Phaedra through the Smithsonian Transcription Center.

While astronomers have learned a lot about how stars, planets, galaxies and more interact and evolve, there’s much that’s still unknown. The cosmos changes slowly, so having a night sky record dating back more than 100 years could help provide data for astronomers to compare and contrast against modern-day observations.

Without such a reference, Bouquin says, “It’s like you didn’t have the fossil record, but you were trying to do paleontology. This gives you that record.”

Currently, the bulk of the Harvard Computers’ work is locked inside thousands of notebooks at the Harvard College Observatory. They contain precise notations and measurements comprising decades of work as the women studied each glass plate in detail and noted the positions, movements and characteristics of the stars it captured. Project PHaEDRA is opening that data up to astronomers for the first time by transcribing the notebooks and converting them into a digital, searchable format.

Citizen scientists working with PHaEDRA are turning the notebooks into a corpus of data that astronomers can reference to see what the night sky looked like over a century ago. That’s important because much of our understanding of the universe comes from watching objects like stars move over time. The further back astronomers can look, the more they can learn.

“Volunteers are the way the whole thing works,” Bouquin says. “We would not be able to do much of anything without the volunteers.”

The project is currently about halfway through transcribing the collection of thousands of notebooks, Bouquin says. They’ve already uploaded a number of their transcriptions to NASA’s Astrophysics Data System, a massive repository of data from astronomers where scientists can make use of them.

In addition to adding to our knowledge of space, the project is reminding us of the often-overlooked contributions of women in astronomy, Bouquin says. Among other things, Henrietta Swan Leavitt studied variable stars, which change in brightness over time. That work led to the creation of the cosmic distance ladder, a means of measuring things very far away in the cosmos. Her discoveries ultimately helped reveal the age of the universe, and they’re instrumental even today in determining how far away things are.

Another computer, Cecilia Payne-Gaposchkin, studied the spectra of stars — the wavelengths of light they emit. Her work helped show that stars are made primarily of hydrogen and helium. Before that, astronomers thought stars were made of the same elements as Earth.

“Some of them did really, really fantastic work, and all of them contributed to an amazing undertaking,” Bouquin says. “The fact that that got erased is wrong.”

And along with the computers’ observations are bits of historical ephemera that were previously lost to history. Sketches, notes, postcards and more have turned up in the margins of the notebooks, a testament to the very real lives these women lived. Project PHaeDRA volunteers, Bouquin says, have proven adept at picking out these personal touches and bringing a broader perspective to the work of the Harvard Computers.

If not for the work of these modern-day citizen scientists, the valuable efforts of dozens of pioneering women astronomers may have been lost forever. But today, page by page, their hard-won discoveries are returning to the light.

Find Project PHaEDRA, and a variety of other transcription efforts, through Scistarter’s Smithsonian Transcription Center project page. From there, you can navigate to a tutorial on transcribing. Once you’re set up, you can pick from a number of notebooks by different women astronomers and choose one to begin transcribing.

Nate is a science writer and editor with more than four years of experience translating complex research into compelling narratives. He has reported from archaeological digs and particle colliders, and managed a digital team at a national magazine. You can find clips of his work at nathanielscharping.com Nate helped found a marketing agency focused on providing scientific storytelling to brands and nonprofits. At Lunaris Creative he writes, edits and strategizes with clients to engage and inspire their audience.