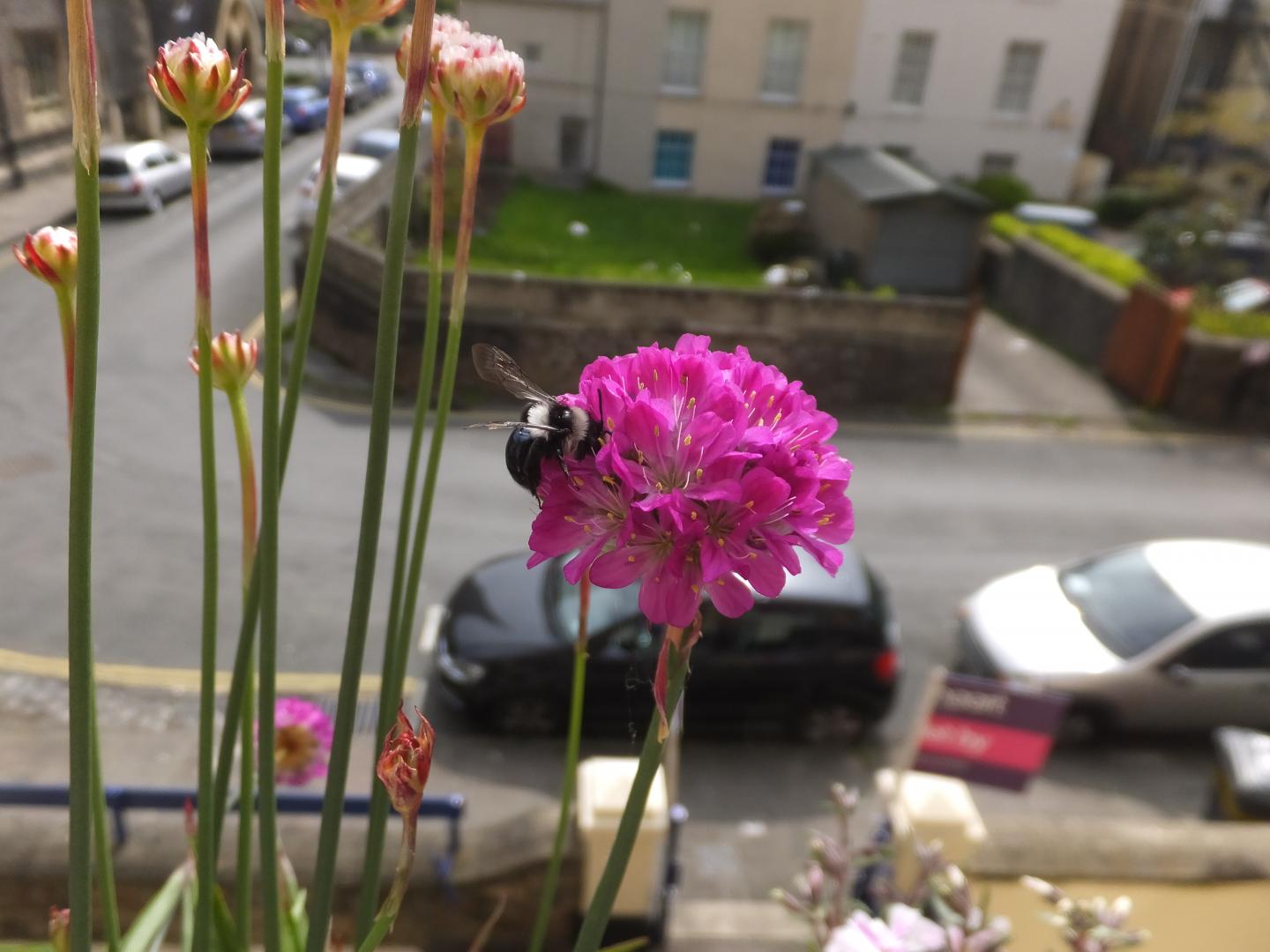 Your urban home garden is by far the biggest and best source of food for pollinating insects, including bees and wasps.

Whether you have a backyard in the suburbs or a container garden on your city high rise balcony, your garden can be a valuable fueling station for pollinating insects. According to new research, home gardens are even more important than previously thought because one garden can produce a far greater quantity of top-quality food for pollinators than any other plot of land. For a bee or other pollinator, that’s like getting specialty grocery store products at bargain basement prices.

The research, led by the University of Bristol and carried out in partnership with the universities of Edinburgh and Reading and the Royal Horticultural Society, examined the nectar production in four major UK towns and cities: Bristol, Edinburgh, Leeds, and Reading. Nectar production was measured in nearly 200 species of plant by extracting nectar from more than 3,000 individual flowers.

The data reveal that home gardens are by far the biggest source of food for pollinating insects, including bees and wasps, in cities and towns. Even balconies and window boxes in densely urban areas can provide important food for pollinators.

We’ve known for a while that gardens of all sizes provide important food for pollinators. Now we know just how much nectar is produced in urban areas. It turns out that residential gardens great and small account for an impressive 85 percent.

From nectar to biodiversity

A teaspoon of nectar is to a bee what more than a tonne of food is to an adult human. And it takes just three home garden plots to produce that precious teaspoon of nectar in a single day and fuel thousands of bees. Bees and other pollinators use that fuel to fly further afield, pollinate more plants, increasing genetic diversity of our plants and animals. This increased biodiversity helps our food crops defend against diseases that threaten to wipe our our food supply.

The volume and quality of nectar produced by a single urban garden surprised the research team. According to Ecologist Nicholas Tew, “We expected private gardens in towns and cities to be a plentiful source of nectar, but didn’t anticipate the scale of production would be to such an overwhelming extent. Our findings highlight the pivotal role they play in supporting pollinators and promoting biodiversity in urban areas across the country.”

“We found the nectar supply in urban landscapes is more diverse, in other words [it] comes from more plant species, than in farmland and nature reserves, and this urban nectar supply is critically underpinned by private gardens,” Tew explains.

Turn your garden into a Formula One fueling station for pollinators

Urban home gardeners play a huge role in pollinator conservation. Without those home gardens, “there would be far less food for pollinators, which include bees, wasps, butterflies, moths, flies, and beetles in towns and cities. It is vital that new housing developments include gardens and also important for gardeners to try to make sure their gardens are as good as possible for pollinators,” Tew explains.

According to the research team, you can help by…

Home gardens support our pollinating insects, so gardeners play an integral role in the health of of pollinators and our environment. According to Dr. Stephanie Bird, an entomologist at the Royal Horticultural Society, “Gardens should not be seen in isolation – instead they are a network of resources offering valuable habitats and provisions when maintained with pollinators in mind.”

This research was published in the peer-reviewed Journal of Ecology.