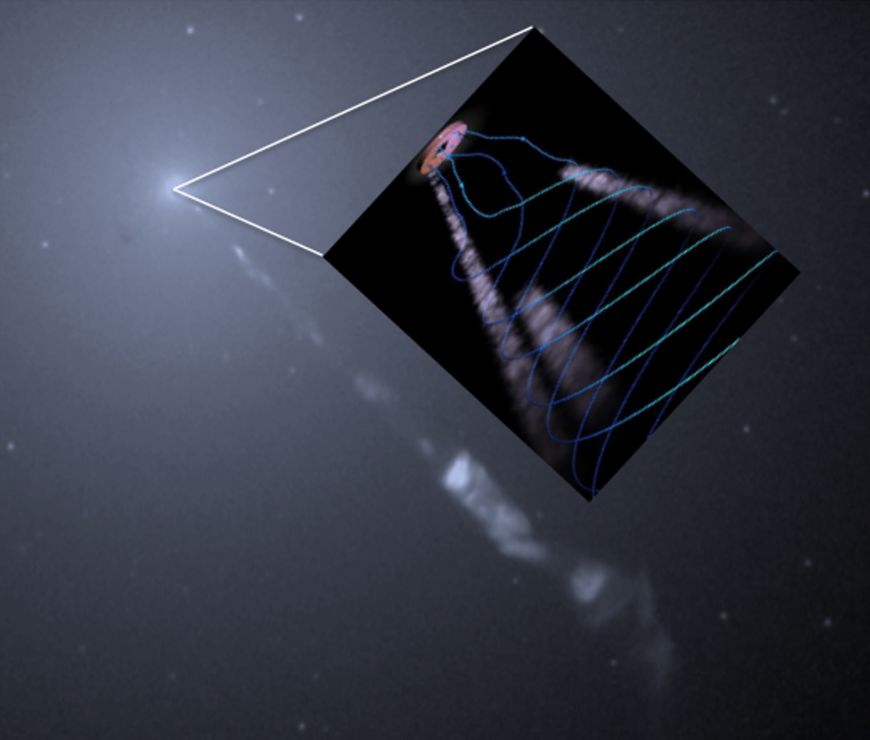 “We ordinary people might lack your great speed or your X-ray vision, Superman, but never underestimate the power of the human mind.”

As humans, we perceive only a small portion of the electromagnetic spectrum. Familiar examples of the sun’s spectrum are the separation of colors as sunlight passes through a prism and the creation of a rainbow when sunlight strikes water droplets. Because our eyes are attuned to the sun’s light, we see a range of colors from deep red through orange, yellow, green, blue, and into an indigo/violet hue.

The universe around us is full of “light” at wavelengths we can’t see. Longer wavelengths below red are called infrared, which we perceive as heat. Still longer than the infrared waves are microwave and radio waves. We’ve learned how to harness them for everything from heating food to radar to communication frequencies for television, mobile phone networks, and WLAN.

More energetic waves with shorter frequencies than the violet hue that our eyes perceive are called ultraviolet (UV) light. Although humans can’t see in this part of the spectrum, some animals and insects can. We may not be able to see in UV, but anyone who has ever gotten a sunburn has certainly felt it.

X-rays and gamma rays are even shorter wavelengths than UV. We use these wavelengths for medical imaging (such as diagnosing broken bones), verifying that welded joints between two metals are complete, creating silicon structures for CPUs and memory, or even destroying tumors in inoperable locations.

Since a black hole by definition is black because no light can escape from it, how can we take a “photograph” of a black hole? Unlike normal stars, a black hole isn’t emitting radiation for us to observe. We can “see” black holes through their interaction with space-time or with matter.

A black hole that’s actively consuming matter is easier to detect than a passive one, at least theoretically. As the matter falls toward the black hole, it is torn apart by the tidal forces. As these fragments are carried in ever tighter orbits, they move faster and collide more frequently with other material. The more energetic matter is, the hotter it is and the higher the radiation frequency it emits. Black holes feeding on matter trigger the generation of radio waves, microwaves, infrared emissions, light, ultraviolet, x-rays, and under special circumstances even gamma rays.

We have two methods of detecting black holes, so it should be simple, shouldn’t it?

“Space is big. You just won’t believe how vastly, hugely, mind-bogglingly big it is. I mean, you may think it’s a long way down the road to the chemist’s, but that’s just peanuts to space.”

Douglas Adams, The Hitchhiker’s Guide to the Galaxy﻿

Not only are stars and galaxies and black holes all very far away from us, making even huge objects such as stars appear very small, but much of the universe is hidden from our view by stars and clouds of gas and dust. The view toward the center of our galaxy, the Milky Way, is especially obscured from our vantage point. Just as we can’t see the Moon or stars on a cloudy night, astronomers struggle to see the center of our galaxy because of every star, nebula, and gas cloud between the center and us.

While humans weren’t gifted with Superman’s X-ray vision, we have figured out how to build instruments to see through the dust, gas, and stars separating us from the center of the Milky Way.

Build it big: A telescope the size of the Earth

The Event Horizon Telescope (EHT) isn’t just one telescope. It’s a group of radio telescopes, listening at a wavelength of 1.3 mm (260 GHz), spread around the globe to link their observations. The technical term for this is Very Long Baseline Interferometry. Because these telescopes are at different locations around the Earth, when their observations are linked up, they resolve details as if they were a single telescope the size of Earth’s diameter. What does that mean, in effect?

Douglas Adams reminded us of how vast the universe is. Even the roughly 26,000 light-years to the center of the Milky Way, although still in our immediate cosmic neighborhood, is a distance too big for us to visualize. As humans, we have no direct experience with objects or distances of this scale.

Transforming things to a scale we’re more familiar with, an Earth-sized radio telescope resolves objects well enough to detect a grape at the distance of the Moon. At this scale, imagine the disk of matter falling into the black hole as the size of a DVD at the moon’s distance. The central hole in the DVD represents the black hole’s event horizon in our analogy. A typical grape is slightly larger than the hole in the DVD but not by much. That’s how close scientists are, with current technology, to being able to see all the way up to the event horizon of  galactic black holes.

It’s easier to see M87’s center than to see the center of the Milky Way because we have less gas and dust blocking our view. Being much farther away, M87’s black hole is a smaller target. Fortunately for astronomers, M87’s black hole is more massive than the one in the Milky Way. In addition to being more massive and therefore affecting a larger area of space, gravitational lensing magnifies the image of the center of M87. Thus, the M87 black hole region appears roughly the same size to our telescopes as the one at the Milky Way’s center [2].

[1] Author’s note: Based on my research for this article, I expect that the observations of a black hole’s event horizon, which will be reported on April 10, 2019, were taken of the active galactic nucleus at the center of M87 during April 2017. One reason the findings are only being reported in April 2019 is that observations from the South Pole radio telescope had to be physically shipped, delaying data analysis. Additionally, the findings required peer review before publication. This is only a well-educated guess based on reading publicly available papers. I do not have early access to the paper or direct contact with any scientists involved.