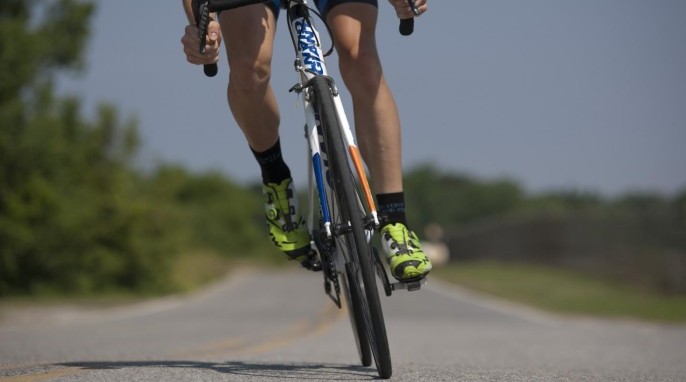 Working together, scientists and teachers have developed a method to teach teens about aerodynamic drag. Are you using cycling to teach physics, yet?

“Usually, describing a realistic motion including aerodynamic drag would be beyond the scope of a secondary physics course. However, I realized that this could be done fairly easily for a bike slowing down by aerodynamic drag,” explains Florian Theilmann from the Weingarten University of Education in Germany.

From Textbook to Real-Life Physics

“In a common physics class, physics seems to be presented in a very simplified way,” Theilmann continues. “Sure, that helps you to do easier calculations or some experiments, but then it is less connected to real life.”

By measuring the speed of one of their classmates riding a bike, taking photos, and measuring the frontal area of the cyclist, the teens were able to calculate the drag coefficient.

The researchers and teachers set up an experiment where a student on a bike was asked to pedal up to a certain point and then call out his or her speed when passing markers on the way. The students also measured the rolling friction of the bike on the surface by pulling the bike along using a dynamometer for ten meters.

These data were then entered into a spreadsheet so the students could vary the aerodynamic drag to match an ideal plot against the plot of their experimental data. Moreover, the students loved working with the physics of their daily lives.

Theilmann is also confident that computers will continue to improve how we teach physics to kids.

“In the 19th century, it was necessary to understand how to do extremely sophisticated math in order to do the more sophisticated physics,” he explains. “But today, the computer has completely changed this. Now, problems are much simpler to calculate, so we’re able to address much more complex problems and open up new frontiers in science.”

Theilmann hopes to work on adapting more real-life physics problems to the classroom, including his current work on simple experiments with his own students, such as the rate of water flow out of a jug or the cooling of a cup of tea.

The results of this physics education project were published in December, 2015, in the journal Physics Education.