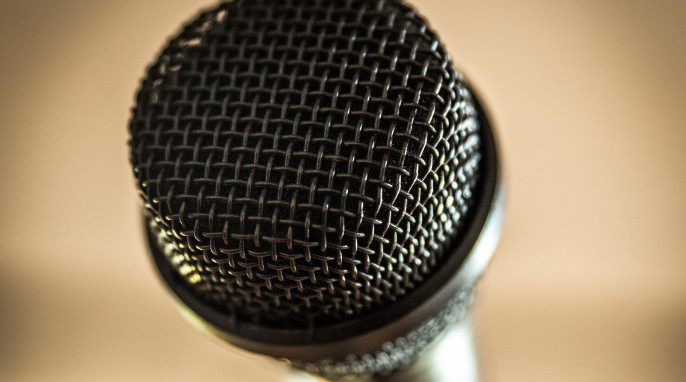 Scientists have developed a graphene microphone that is nearly 32 times more sensitive than ordinary microphones made from nickel.

Using graphene, the research team at the University of Belgrade, Serbia, created a vibrating membrane – the part of a microphone that converts the sound to a current.  At frequencies up to 11 kHz, the microphone was able to achieve 15 dB higher sensitivity compared to a commercial microphone.

“We wanted to show that graphene, although a relatively new material, has potential for real world applications,” explains Marko Spasenovic. “Given its light weight, high mechanical strength and flexibility, graphene just begs to be used as an acoustic membrane material.”

Toward Graphene Microphone at Lower Cost

To test their hypothesis, the team built a graphene  membrane, approximately 60 layers thick, over a sheet of nickel foil.

Next, they etched away the nickel foil and placed the new graphene microphone membrane in the same housing as a commercial microphone. The result was a 15 dB improvement in the microphone’s ability to pick up sound.

The researchers also simulated a 300-layer thick graphene membrane, which shows potential for performance far into the ultrasonic part of the spectrum.

So, can we buy one of these ultrasonic microphones? Not yet. “At this stage there are several obstacles to making cheap graphene, so our microphone should be considered more a proof of concept,” says Spasenovic. “The industry is working hard to improve graphene production.  Eventually, this should mean we have better graphene microphones at lower cost.”

Graphene (/ˈɡræf.iːn/) is an allotrope of carbon. It is the basic structural element of other allotropes, including graphite, charcoal, carbon nanotubes and fullerenes. Graphene has many extraordinary properties. It is about 207 times stronger than steel by weight, conducts heat and electricity efficiently and is nearly transparent. (Wikipedia)

These research findings were published on November 27, 2015, in the journal 2D Materials.

Photo by Robert Cheaib via Flikr

The full version of the paper “Multilayer graphene condenser microphone” is available here.