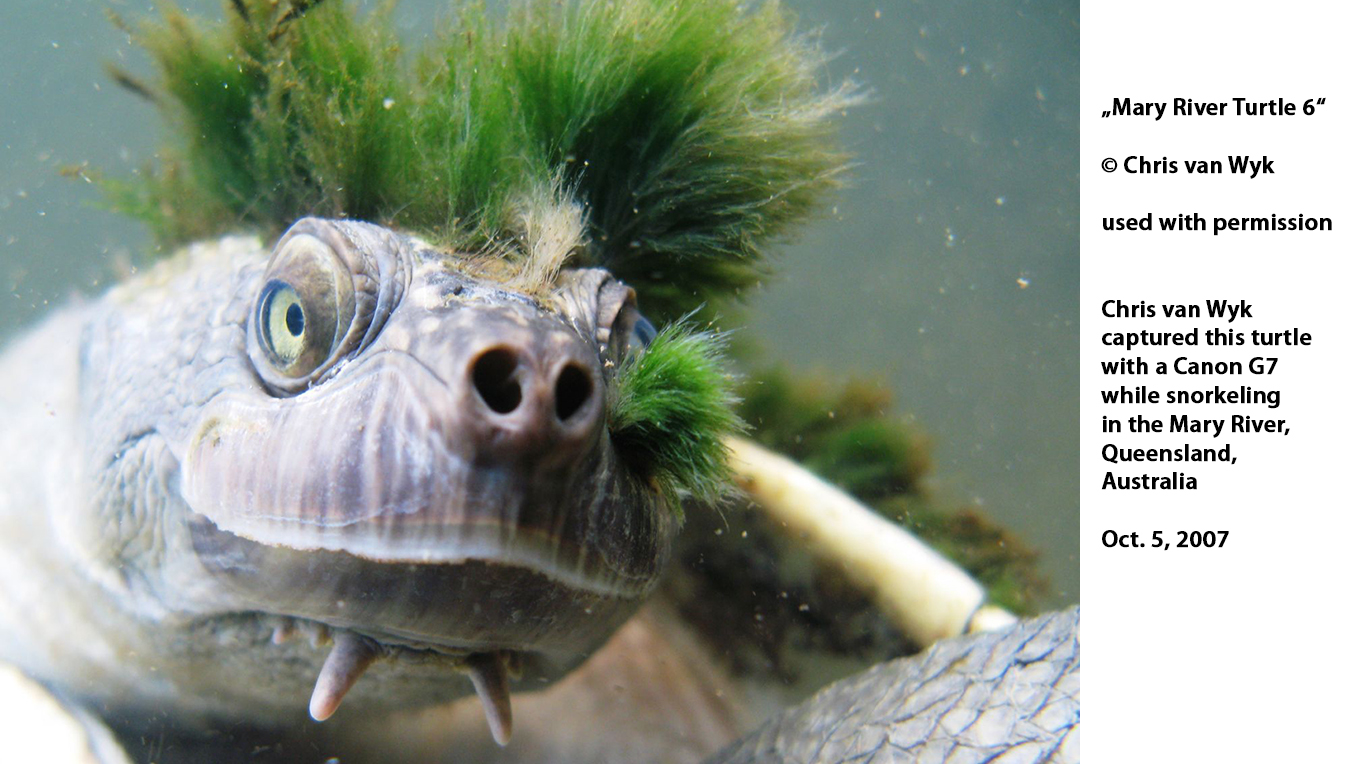 This is the second part of our series on turtles and how cute animals can inspire successful conservation efforts. Have you read A Tale of Two Turtles: Part 1?

Best-Looking Turtle in the World

Chris Van Wyk, photographer and conservationist, was in the right place at the right time to capture incredible photos of an algae-covered Mary River turtle. His photos went viral and appeared in major newspapers worldwide. Thanks to this photogenic turtle, conservationists were able to save its habitat from a dam that was going to be built, which would have had a devastating impact on the turtle and other species. Why did this turtle photo make such a difference?

Cuteness as a Secret Weapon

Anthropomorphism, the attribution of human characteristics to nonhumans, can be a powerful ally in conservation efforts. When humans perceive animals as cute, bold, proud, independent, or any number of other attributes, it can increase support for protection of those animals and their habitats.

Generally, anthropomorphism has positive outcomes for species. Sometimes, though, animals may be so cute to humans that the demand for them rises, leading to decimation of wildlife as they are captured for pets. The slow loris is one such species where the wild population is under extreme pressure, with illegal pet trade of this extremely cute animal contributing to its decline.

What about animals that don’t have endearing looks? If they share an overlapping range with a cute species, they may also benefit from the attention and money that a cute species can gain toward conservation efforts. This doesn’t mean one species is more valuable than the other; far from it! Scientists and nature lovers alike recognize the importance of species diversity, but to involve the public it helps to have cute or charismatic animals put their faces on the effort.

Mary River Turtles Were Too Cute

Like the slow loris, during the 1960s and 1970s Mary River turtles were captured for pets. Eggs were sold to pet shops as “common saw-shelled turtle” eggs. Approximately 12,000 eggs were harvested from wild nests between 1962 and 1974. Hatchlings were sold in Victoria pet shops as “penny turtles”. An estimated 15,000 hatchlings were taken out of the wild. In 1974 it became illegal to trade turtles in Queensland, but because the pet traders would not divulge the location the eggs and hatchlings had been taken from, it was not until the 1990s that biologists found the species in the wild.

Fortunately, since 1992 Mary River turtles have been considered an endangered species under Queensland’s Nature Conservation Act. They were also protected under Australia’s Environment Protection and Biodiversity Conservation Act of 1999. The species is listed on the International Union for the Conservation of Nature’s Red List as Endangered, meaning that there’s a high risk of the species going extinct in the wild.

Numbers in the wild are hard to come by, but according to the Australian Government Department of Environment there has been a decline of around 95 percent of breeding females since the 1960s. The 1998/1999 survey identified only 10 females on a particular set of sand banks used for nesting, which could be compared to the 1960s because a former egg collector divulged locations and numbers of eggs harvested between 1962 and 1974. This data provided a basis for estimating the previous and current populations.

Mary River turtles are mainly plant eaters, but like Arrau River turtles (part I) they may occasionally eat insects, mussels, and eggs.

The species continues to have problems producing hatchlings. Foxes and goannas (Australian monitor lizards) raid nests frequently. Additionally, illegal egg collecting continues, and in 1999 the nesting sites were flooded, wiping out the entire year’s offspring. In 2002 biologists caged 52 nest sites to prevent predation. That year 78 percent of the eggs produced hatchlings. Removing the eggs and artificially incubating them between 29°C and 31°C has shown success rates of 95 percent. Hatchlings are then released into the wild.

Mary River turtles belong to one of several turtle species that use cloacal respiration. During prolonged dives a turtle can pull in water from the external intestinal vent. The water goes into two special bladders that exchange oxygen in the water with the turtle’s blood. As with all turtle species having cloacal respiration capabilities, these do best in oxygenated water, that is, rapidly flowing water. Still water in dams is poorly oxygenated in the top two meters, and there is almost no oxygen below five meters.

Despite scientific evidence that the Mary River turtle was endangered and that it needed a habitat with well oxygenated, flowing water, a project to build a dam was proposed in a critical part of its habitat. The Traveston Crossing Dam would have threatened additional species as well.

Fortunately, Chris Van Wyk’s photos of Mary River Turtles were a viral hit. This photogenic animal helped conservationists rally public opposition to the dam. In 2009, as a result of Chris’s photos, Australian Federal Environment Minister Peter Garrett refused to fund the dam project, ending that particular threat. There are many other animals in the same habitat which are just as worthy of survival and which might have been flooded out if the dam had been built. The Mary River cod, the Queensland lungfish, the great barred frog, the giant barred frog, and the Conondale spiny crayfish continue to benefit from Chris Van Wyk’s photos of the “punk rock turtle.”

Keep your eyes on GotScience.org for an upcoming special with Chris Van Wyk!

Anthropomorphism Can Be a Tool for Conservation