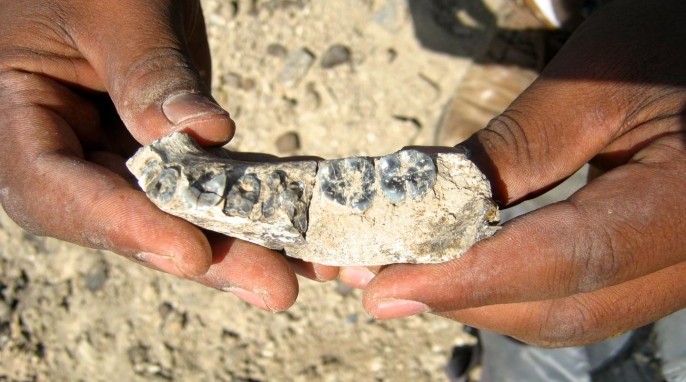 The discovery of a fossilized lower jaw bone in Ethiopia has pushed back evidence of the human genus — Homo — to 2.8 million years ago. The find predates all previously unearthed fossils of the Homo lineage by approximately 400,000 years.

For decades, scientists have been searching in Africa for fossils documenting the earliest phases of the Homo lineage. However, specimens recovered from between 3 and 2.5 million years ago have been frustratingly few and often in poor condition. As a result, there has been little agreement on when the lineage of the modern human originated. Dated at 2.8 million years old, the new fossil provides clues to changes in the jaw and teeth in Homo.

“In spite of a lot of searching, fossils on the Homo lineage older than 2 million years ago are very rare,” says Brian A. Villmoare from the University of Nevada Las Vegas. “To have a glimpse of the very earliest phase of human evolution is particularly exciting.”

The new fossil was found in the Ledi-Geraru research area by Chalachew Seyoum of Arizona State University. The fossil preserves the left side of the lower jaw, or mandible, along with five teeth. Analysis of the fossil has revealed advanced features, including slim molars, symmetrical premolars and an evenly proportioned jaw. These are some of the features that distinguish species of the Homo lineage, such as Homo habilis who lived 2 million years ago, from the more apelike early Australopithecus.

“The Ledi jaw helps narrow the evolutionary gap between Australopithecus and early Homo,” says William H. Kimbel from the ASU Institute of Human Origins and School of Human Evolution and Social Change. “It’s an excellent case of a transitional fossil in a critical time period in human evolution.”

This research has been published in the journal Science. Financial support was provided by the National Science Foundation, the Institute of Human Origins at Arizona State University, and the George Washington University Selective Excellence Program.