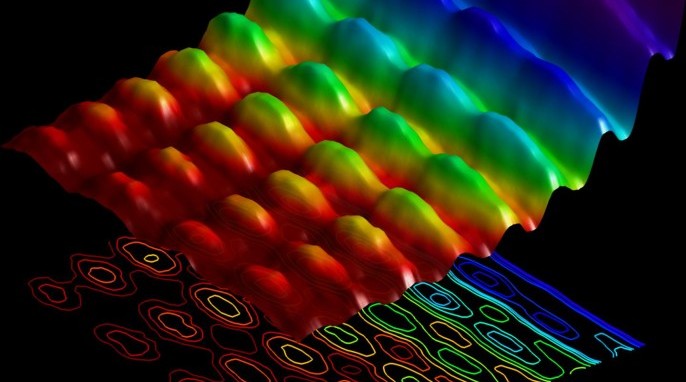 In 1905, Albert Einstein proposed that light has properties of both a wave and a stream of particles. Now, researchers in Switzerland have taken  the first ever photo of light behaving both as a wave and as a stream of particles at the same time. The ability to observe light in this way could bring us a step closer to building super fast quantum computers, the researchers say.

“This experiment demonstrates that, for the first time ever, we can film quantum mechanics – and its paradoxical nature – directly,” says Carbone. “Being able to image and control quantum phenomena at the nanometer scale like this opens up a new route towards quantum computing.”

This research is a collaboration between the Laboratory for Ultrafast Microscopy and Electron Scattering of EPFL, the Department of Physics of Trinity College (US) and Lawrence Livermore National Laboratory. The imaging was carried out EPFL’s ultrafast energy-filtered transmission electron microscope–one of the two in the world.

Funding for this work was provided by the European Research Council and the US Department of Energy. The results of the study have been published in the journal Nature Communications.

Top Image: Energy-space photo of light confined on a nanowire. This image simultaneously shows both spatial interference and energy quantization. The light can be seen behaving as a wave and as particles at the same time. (Fabrizio Carbone/EPFL)