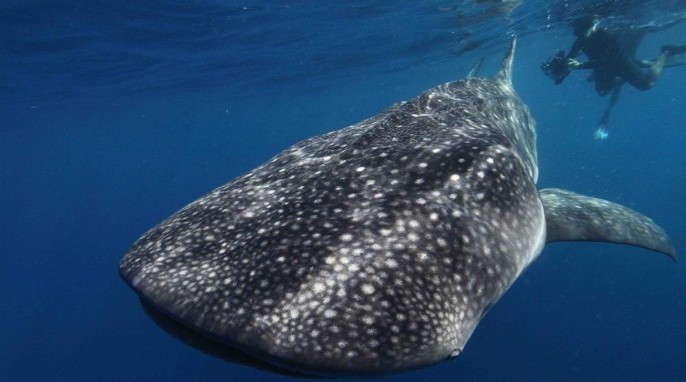 Whale sharks, the largest fish in the ocean, have been getting caught in commercial tuna fishing nets. New regulations may protect them.

Fishermen have learned that whale sharks are so large that they naturally attract tuna and other fish seeking a hiding place. To take advantage of this, some fishermen will deploy nets around a whale shark to capture any tuna swimming beneath, usually catching and killing the shark in the process.

In an effort to protect these animals, the Inter-American Tropical Tuna Commission (IATTC) adopted a resolution that prohibits the placement of purse seine nets around the animals. The resolution also requires the release of sharks, unharmed, if they are caught in a net.

Although encircling whale sharks with nets is not a method used by U.S. tuna fishing vessels, NOAA Fisheries issued regulations prohibiting the practice by the U.S. fleet operating in the EPO. These regulations ensure that the U.S. is meeting its obligations under the IATTC resolution.

Chris Fanning, a policy analyst with NOAA Fisheries’ West Coast Region who helped draft the regulations and has enjoyed swimming with whale sharks says, “These are some of the most incredible animals in the ocean, and while U.S. fishing vessels don’t engage in this practice, we are very supportive of this international resolution to help protect these amazing creatures.”

Whale sharks have enormous mouths that are nearly five-feet in diameter. The sharks feed by siphoning plankton, small fish, and larvae as they swim through the ocean. They are found mostly in tropical and warm ocean waters and live approximately 70 years.

Whale sharks give birth to live young, but scientists don’t yet know where their breeding sites are. According to biologist and shark expert Eric Hoffmayer, “They’re the largest fish in the ocean, yet they’re elusive enough that we still can’t answer this basic biological question.” Hoffmayer and other scientists are using satellite tags to track these amazing animals in the hope of discovering their nursery grounds. “We could protect these animals a lot more effectively if we knew where they begin their lives.”

This information is from the National Oceanic and Atmospheric Administration (NOAA).

Sharks May Have Personalities

Do sharks have social personality traits? According to a study conducted by a team of researchers at the University of Exeter, they do.