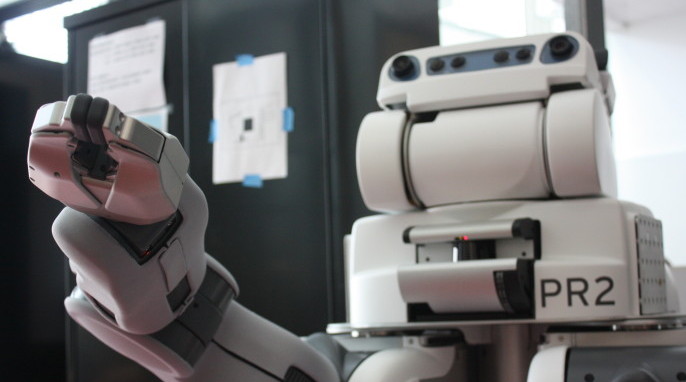 A household robot to help with the daily chores is surely every busy person’s dream. But who would want a clumsy robot that’s always getting under your feet? That is the challenge being addressed by researchers at MIT. They have built a sophisticated robot and are teaching it to work together with people.

In a recent article, we reported on the robots being put to work at the retail giant Amazon to serve our holiday shopping needs.  But the future may very well have interactive and collaborative robots in our homes, too. The National Robotics Initiative (NRI) — a government-wide effort to develop robots that can work alongside humans — envisions robots that are cooperative assistants, able to give people a better quality of life and benefit society and the economy.

One of the dozens of NRI-supported research programs is taking place at the MIT Computer Science and Artificial Intelligence Laboratory, where a team of researchers have called their robot pal “Robotina.” “We chose a name for every robot in our lab. It’s more personal that way,” explains graduate student Claudia Pérez D’Arpino, who grew up watching the cartoon The Jetsons. (In the Spanish-language version, Rosie, the household robot, is called Robotina.)

Robotina has been in the interactive robotics lab of engineering professor Julie Shah since 2011. While she isn’t the Jetson’s household robot just yet, Robotina is designed to interact with humans and perform many types of work, much like the cartoon inspiration.

RELATED: HOLOGRAMS YOU CAN TOUCH AND FEEL

In her research–supported by the National Science Foundation (NSF)–Shah and her team study how humans and robots can work together more efficiently. “We focus on how robots can assist people in high-intensity situations, like manufacturing plants, search-and-rescue situations and even space exploration,” Shah says.

The team’s experiments are showing that humans often work better and feel more at ease when Robotina is able to make decisions.

Robotina has multiple sensors from head to base to help it interact with its environment. With proper programming, its “hands” can do a variety of tasks from fold towels to fetch objects. One experiment showed that a robot can also pick up a soda can without smashing it, a discovery that surprised Matthew Gombolay, graduate student and NSF research fellow. “I thought it’d be really strong and crush the can, but it didn’t. It stopped.”

That’s because Robotina has the ability to gauge how much pressure is required to hold or manipulate an object. It can also sense when it is too close to something–or someone–and stop. Proximity awareness in robots not only prevents dangerous or awkward robot-human collisions, it builds trust. “I am definitely someone who likes to test things to failure. I want to know if I can trust it,” Gombolay says of the experiment.

Roboticists who aim to integrate robots into human teams are serious about trying to hard-wire robots to obey Isaac Asimov’s first Law of Robotics: A robot may not injure a human being. When decision-making robots like Robotina move into factories, or the home, the people around them must know that they won’t be hurt.

A Household Robot that Predicts Your Next Move

Ideally, in the factories of the future, robots will be sufficiently adept at predicting and reacting to their human co-workers’ behavior and movement to stay out of the way. The goal is to create robots so in tune with their surroundings that proximity sensors are not even needed to avoid collisions.

“Suppose you want a robot to help you out but are uncomfortable when the robot moves in an awkward way. You may be afraid to interact with it, which is highly inefficient,” Pérez D’Arpino said. “At the end of the day, you want to make humans comfortable.” To this end, Pérez D’Arpino is developing a model that will help Robotina guess what a human companion will do next, similar to way humans predict each other’s movements and actions.

In one experiment, Robotina worked with a student to build Lego models and guessed in only 400 milliseconds (the average time a human eye blinks) how the student would move next. The robot is able to determine in what direction the person’s hand will move by the angle of the arm, elbow and wrist, and use this information to reach for a different spot. The result was a more natural, more fluid collaboration.

Household Robots for the Future

The robotics work taking place in the MIT lab may eventually enable Robotina to become a more well-rounded and helpful robot. It may even be the prototype for your first robot coworker or household robot. Interestingly, the experiments at MIT demonstrate humans’ willingness to embrace workplace and household robots in appropriate roles.

“An old-school way of thinking is to make a robot for each task,” Gombolay says. “But unless we make an advanced, general-purpose robot, we won’t be able to fully realize their full potential. We’re at a really exciting time.”

This workplace and household robotics research is being conducted by the Massachusetts Institute of Technology and the Association for the Advancement of Artificial Intelligence with funding from the National Science Foundation.