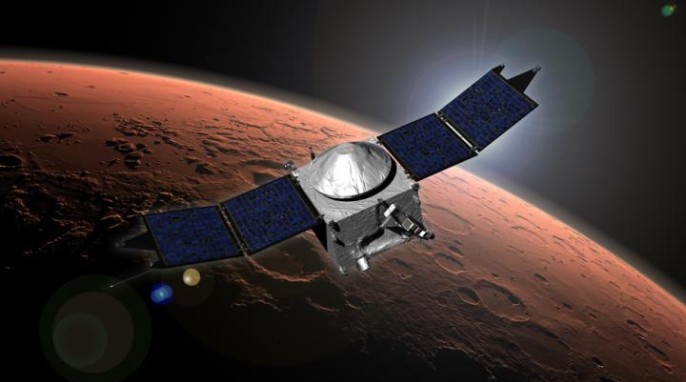 A comet traveling from the most distant region of our solar system passed amazingly close to Mars on October 19, and three spacecraft were there to observe the effects. If you had been standing on Mars, you would have seen thousands of shooting stars, according to astronomers from the University of Colorado, Boulder.

The comet came from the Oort Cloud and passed within about 87,000 miles (139,500 kilometers) of Mars. That’s less than half the distance between Earth and our moon and less than one-tenth the distance of any known comet flyby of Earth.

One European spacecraft and two from NASA, including one from its Mars Atmosphere and Volatile EvolutioN (MAVEN) mission, have used this rare opportunity to gather new information about the comet and how its visit has altered the Martian atmosphere.

“They call this comet encounter a once-in-a-lifetime event, but it’s more like once-in-a-million years,” said CU-Boulder Associate Professor Nick Schneider. “MAVEN got there just in time, and we were ready. The numbers suggest a Martian would have seen many thousands of shooting stars per hour — possibly enough to be called a meteor storm — so it must have been a spectacular event that night on Mars.”

“MAVEN is well suited for studying the effects of the dust from the comet in the Martian atmosphere, because it makes measurements at the altitudes where the dust was expected to have an effect,” said CU-Boulder Professor Bruce Jakosky of the Laboratory for Atmospheric and Space Physics. “We also should be able to see if there are long-term effects from the comet dust in that same region of the atmosphere.”

Data from observations carried out by MAVEN, NASA’s Mars Reconnaissance Orbiter (MRO) and the European Space Agency’s Mars Express spacecraft revealed that debris from the comet, known officially as Comet C/2013 A1 Siding Spring, caused an intense meteor shower and added a new layer of ions, or charged particles, to the Martian ionosphere, an electrically charged region in the atmosphere that begins about 75 miles (120 kilometers) above the planet’s surface.

The debris resulted in significant but temporary changes to the planet’s upper atmosphere and possible long-term changes.

A joint U.S. and Italian instrument on Mars Express observed a huge increase in the density of electrons in the Martian ionosphere following the comet’s visit.

Furthermore, using atmospheric dust samples collected by MAVEN, scientists have been able to determine that the comet delivered eight different types of metal ions, including sodium, magnesium, and iron to Mars.

These are the first direct measurements of the composition of dust from an Oort Cloud comet. The Oort Cloud, well beyond the outermost planets that surround our sun, is a spherical region of icy objects believed to be material left over from the formation of the solar system.

“This historic event allowed us to observe the details of this fast moving Oort Cloud comet in a way never before possible using our existing Mars missions,” said Jim Green, director of NASA’s Planetary Science Division in Washington. “Observing the effects on Mars of the comet’s dust slamming into the upper atmosphere makes me very happy that we decided to put our spacecraft on the other side of Mars…and out of harms way.”