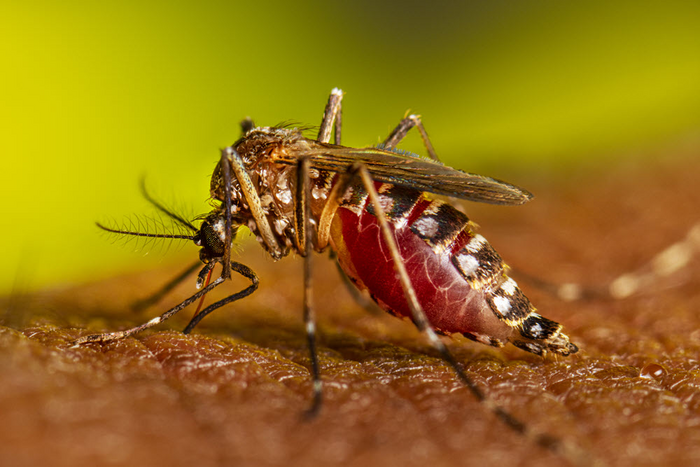 Mosquitoes are drawn to a chemical mixture found on the skin, but what these specific compounds are had not been pinpointed until a recent study.

Chances are, you’ve been bugged by a mosquito at some point in your life. But between malaria, the Zika virus, and multiple fevers spread by these tiny winged insects, mosquitoes can be much more than a high-pitched nuisance. For millions of people worldwide, they are a deadly reality.

A new study from the University of California, Riverside, presents a bit of positive news: thanks to glass beads, sweaty feet, and good old-fashioned science, we may have a reliable way of luring in and eliminating one of the most common disease-spreading mosquito species.

In this study, alongside insect pest control expert and former UCR chemist Jan Bello, UCR entomologist Ring Cardé honed in on one subject: the yellow fever mosquito, known scientifically as Aedes aegypti. This species is native to Africa but has since spread to warm, humid regions across the globe—including the southeastern United States—bringing various fevers and viruses along for the ride.

When female mosquitoes seek out human blood to feed upon, they rely on several different markers such as light, carbon dioxide, temperature, humidity, and scent to guide them to a target. Scientists have known for decades that human-produced chemical markers such as lactic acid and ammonia attract mosquitoes to our skin, but Cardé felt there was more to the picture. The two researchers were able to pinpoint a specific chemical mixture present on human skin that was a strong attractant for Ae. aegypti: carbon dioxide, lactic acid, and 2-ketoglutaric acid.

“Though [other studies] have identified compounds that attract mosquitoes, many of them don’t elicit a strong, rapid effect. This one does,” says Cardé.

Right under your nose

To reach this conclusion, Cardé and Bello considered previous studies that demonstrated female mosquitoes’ attraction to human scent, specifically on glass surfaces. Since foot odor is both strong and easy to collect in large quantities, Bello and two other research assistants gathered scent from their own feet by putting hundreds of 2-millimeter glass beads in their socks and walking around on them for four hours.

After the ordeal—which Bello described as “almost like a massage”—the researchers extracted the scent chemicals from the beads and used it to treat new sets of clean glass beads in petri dishes. They then observed how the mosquitoes reacted by placing the human-scented beads alongside unscented control beads in an isolated chamber.

They noted “substantial landing” on the scented beads within the first 30 seconds of the experiment, according to the study. Further, the two collections of beads were visually similar and didn’t differ in terms of temperature or moisture content, leading Cardé and Bello to believe the mosquitoes’ attraction was driven entirely by scent.

Though this study sheds light on a long-held question about one of the world’s most prolific disease vectors, or carriers—and though Cardé has dedicated 26 years to studying mosquitoes!—the scientists still have some unexplored areas to research.

There are, of course, more types of mosquitoes out there besides Ae. aegypti, so additional studies are needed to determine if these chemical compounds have the same effect on other species. Conversely, there’s room for more experimentation to see what other compounds are attractive to the yellow fever mosquito. The study also opens the door to figuring out how mosquitoes process our odors in their own bodies. Then there’s the age-old mystery of why certain people are more attractive to mosquitoes than others.

But in the meantime, the researchers are hopeful that their study can be used to manage large amounts of mosquitoes, specifically the yellow fever mosquito, by attracting and trapping them. This could help prevent the spread of devastating disease worldwide.

This study was published in the peer-reviewed journal Scientific Reports.