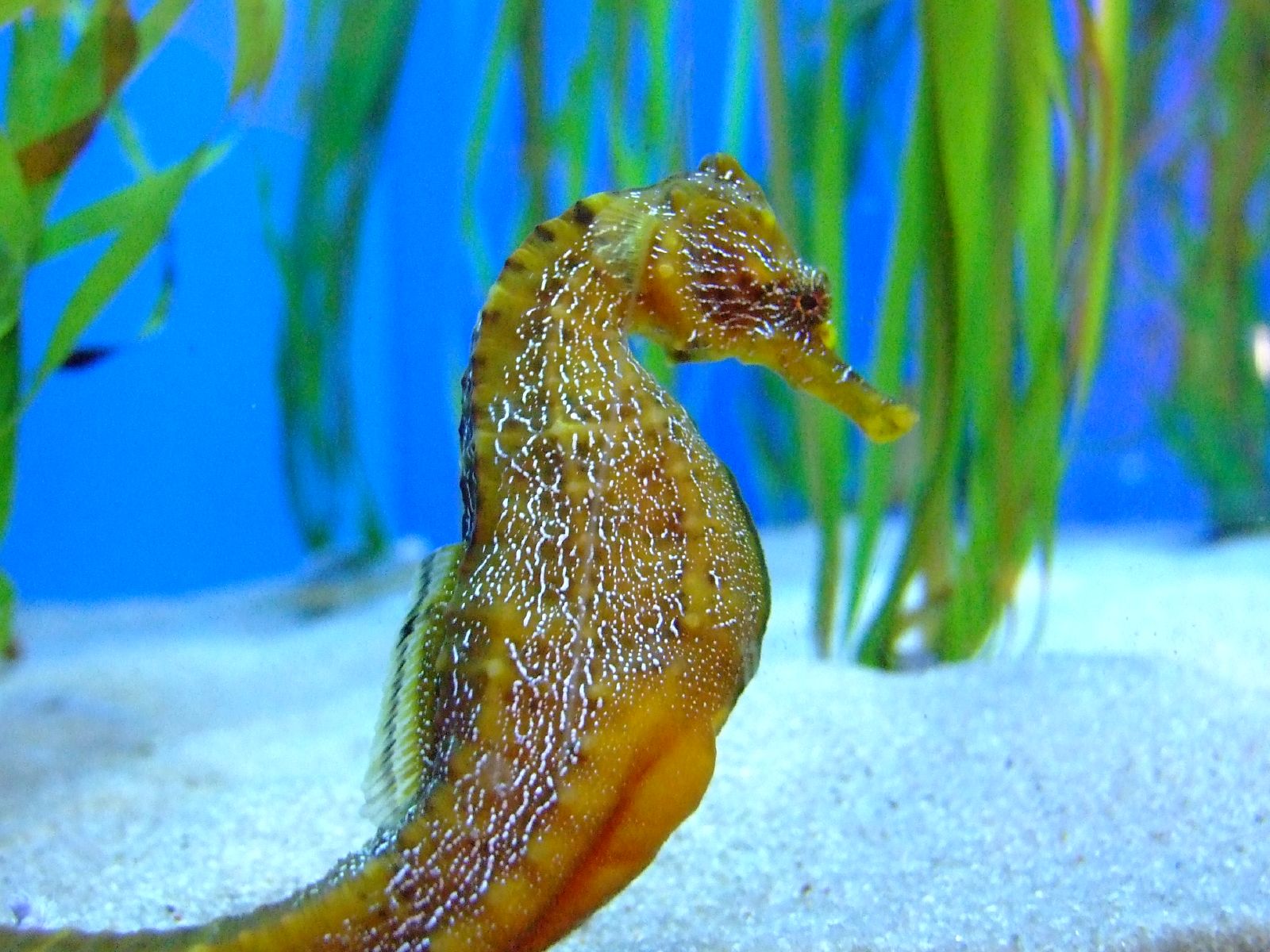 Let’s start with the basics. In biology, members of the species that produce sperm are generally classified as “male,” and members of the species that produce eggs are classified as “female.” Eggs are larger and more energetically costly to produce than sperm. They also contain materials and nutrients necessary for embryo growth once the eggs are fertilized. Since females have already invested more energy in producing their eggs, they are (in most species) the ones that get pregnant and give birth. They hold a greater responsibility in caring for the eggs they’ve spent their energy producing. At least, that’s the tale we’re usually told in evolutionary biology classes.

Seahorses flip this fact upside down. They belong to a family of fish known as Syngnathidae. This family contains more than 300 species of fish, including seahorses, pipefish, and leafy seadragons. The name comes from the Greek words syn (meaning “fused”) and gnathus (meaning “jaw”). All species within this family have a long, tubular snout formed from fused jaws, specifically designed to suck prey into their mouths. The fused jaw gives seahorses and their close cousins that distinct horse-like snout. This trait makes syngnathids unique in the animal kingdom—that, and male pregnancy!

Here’s how it’s done. Male seahorses have a pouch at the front of their bodies called a “brood pouch.” In different species, the pocket can be on the trunk or the tail. In others, the eggs are attached directly to the male’s trunk or tail when the female lays them. In all cases, the males are considered to display pregnancy.

Seahorse mating is quite a dazzling show. The males and females flutter their fins in a “dance,” often over several days. When they have chosen a mate, the female will insert her eggs into the pouch of the male—and her job is done! The male then releases his sperm into the pouch, fertilizing the eggs. In other cases, fertilization might happen outside the pouch, but the male is always the one that will carry the embryos as they grow.

Seahorse pregnancy lasts between 9 and 45 days, depending on the species. Researchers have identified more than 3000 different genes that govern this process. These genes stimulate the creation of a healthy environment for the embryos, including maintaining a proper pH and temperature within the pouch. In some species, the dad also provides calcium and energy-rich fats to build the embryos’ skeletons and characteristic bony body rings. Seahorse dads may also remove wastes produced by the embryo, such as nitrogen and carbon dioxide. They can even produce antibacterial and antifungal molecules to ward off pathogens and protect their embryos from infection.

As the embryos grow, the dad’s pouch begins to stretch, giving that “dad bod” look unique to seahorses and fellow syngnathids. Toward the end of pregnancy, seahorse dads begin to release “hatching signals” that let the embryos know it’s go time.

Seahorse birth is unlike anything you’ve ever seen before. In a series of muscular contractions and sharp, jerking motions, a seahorse dad gives birth to more than 1,000 babies at once. While this might seem like quite a handful of kids to take care of, parents do not provide any care or protection for their offspring after they are born. As a result, only one or two offspring are likely to survive to adulthood. It’s a rough life out there for baby seahorses, and few will live to tell the tale.

Let’s pause for a moment to take in how truly cool this process is. Seahorses are fish, and over 90% of fish lay eggs in the water and leave them to grow on their own. Seahorses, on the other hand, become pregnant in a structure similar to humans! They provide protection, nutrients, and immunity to pathogens for their embryos, similar to the role of a human mother’s placenta.

How do we choose who to mate with? In most species, the females invest more in childbearing and can be picky about the partner they choose to mate with. As a result, males compete for mates by displaying impressive physical characteristics to potential female partners—think of the peacock as an extraordinary example! (This book details other animal attractions, if you’re interested in learning more.)

In seahorses, the roles are switched. Male seahorses strongly prefer larger females who display prominent ornaments such as blue skin pigmentation or skin folds. These preferred females are more likely to produce larger and a greater number of eggs, as well as larger offspring. Females, on the other hand, show little preference in the mate they chose. This sexual selection swap is extremely rare to see in the animal kingdom.

But . . . how did male pregnancy evolve?

Syngnathidae are the family in the animal kingdom that display male pregnancy. On top of having a unique kind of “dad bod,” male seahorses are picky about their female mates, resulting in females showing extravagant displays of size and decor. You might be wondering, how did this role reversal happen?

Researchers studied the RNA sequences of one species of seahorse, Hippocampus abdominalis. They were able to identify key RNA segments involved in brood pouch function, including nutrient transport, waste removal, and immune protection of the embryo. Curiously, these RNA transcripts share homologies, or similarities, with genes of pregnant mammals, reptiles, and other live-bearing fish! Even more curiously, the brood pouch appears to have evolved not once, but multiple times in different Syngnathidae—independently! How could this be?

Research suggests that male brooding structures rapidly diversified and were a major evolutionary innovation in syngnathids. In other words, male pregnancy—the result of several independent genetic mutations—was so successful that the trait was passed on through generations to form the many diverse species of seahorses, pipefish, and leafy seadragons we see today.

The dark side of the dad bod

While male pregnancy and responsible seahorse dads are easy to romanticize, there seems to be a dark side to seahorse reproduction. Researchers have found that some seahorse dads won’t always provide a safe environment for their embryos.

In seahorse terms, a female is considered “unattractive” if she is smaller and displays fewer colors and bony ridges. These traits make her less likely to produce large, healthy offspring. When a male seahorse mates with such an “unattractive” mate, he may withhold or even “steal” resources from their embryos. By stealing or witholding resources from his current embryos, the seahorse dad is “recharging” for the next pregnancy, for which he will hopefully find a more attractive mate. Similarly, having a successful brood with a large, attractive female is energetically taxing and means the male will likely use the next brood to “recharge.” In fact, specific pathways have been found in pipefish (seahorses’ close relatives) via which nutrients from the embryo can be directly incorporated into the dad’s liver and muscles. Male pipefish and leafy seadragons are able to take resources from their offspring to increase their evolutionary fitness. The brood pouch is more than a pocket for embryos to develop—it’s a tool males can use to increase their own fitness.

When it comes to seahorse dad bods, there’s more than meets the eye. The fishy reality isn’t simple, and it certainly isn’t romantic—but they truly are fascinating creatures to explore.

Anderson, P. (2016). Fused jaws and male pregnancy: The fascinating world of horses and dragons of the sea [Blog post]. The Fisheries Blog.

Osbourne, H. (2016, December 14). Here’s how male seahorses ended up being the ones that get pregnant. International Business Times.

Wilson, A. B., Vincent, A., Ahnesjö, I., & Meyer, A. (2011). Male pregnancy in seahorses and pipefishes (family syngnathidae): Rapid diversification of paternal brood pouch morphology inferred from a molecular phylogeny. Journal of Heredity, 92(2), 159–166.

Whittington, C. (2015). The secret sex life and pregnancy of a seahorse dad. The Conversation.

Ive Velikova is a science communicator and YouTuber. A neuroscientist by training, she recently completed her B.Sc. at McMaster University. Her undergraduate research explored the impact of medical language on disease perception. Now, Ive communicates science full-time through writing, storytelling, and, of course, YouTube! Her channel tackles quirky science questions like “Do birds pee?” and “Do fish have tongues?” She is an advocate for women in STEM and actively works to make science a more inclusive space for folks who have traditionally felt left out of it. One day, Ive hopes to have her own science TV show and be the representation she never saw growing up. She is always up for an adventure, from hiking, to dancing, to rock climbing!