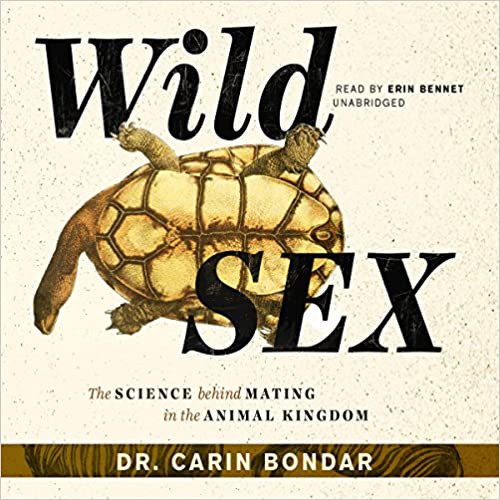 Title: Wild Sex: The Science Behind Mating in the Animal Kingdom
Author: Dr. Carin Bondar
Publisher: Pegasus Books
On sale: Now (September 2016)
Best for: 18 and up

Sexual reproduction. It provides the genetic diversity that is essential for complex life on Earth. Birds do it; bees do it—every member of the animal kingdom does it, from fruit flies to blue whales. But if you think humans have a tough time dating, try having to do it while being hunted by predators, against a backdrop of unpredictable and life-threatening conditions. The animal kingdom is a wild place—and animals have wild mating habits to match.

In Wild Sex: The Science Behind Mating in the Animal Kingdom, Dr. Carin Bondar takes readers on a tour of the animal kingdom as she explores the diverse world of sexual reproduction in the wild. She looks at the evolution of sexual organs (and how they’ve shaped social hierarchies), tactics of seduction, and the mechanics of sex. She investigates a wide range of topics, from whether animals experience pleasure from sex to the many species in which females hold all the reproductive power. Along the way, the author introduces her readers to razor-sharp penises, murderous carnal cannibals, and spontaneous chemical warfare in an epic battle between the sexes.

Did you know that the unique shape of female elephant genitalia makes them immune to rape by male elephants? Or that many urban-dwelling birds have difficulty finding mates because their seductive mating calls can’t be heard over the din of city traffic? If these are the kinds of fun facts that float your boat, this book might be for you.

My review copy of Wild Sex: The Science Behind Mating in the Animal Kingdom has spent the last month sitting on my coffee table during dinner gatherings, riding the subway tucked under my arm, and otherwise flashing itself around. Suffice it to say that the title gets a lot of attention and is quite the conversation starter. Inside the book, interested readers will find a fun and educational text with an undercurrent of good humor. Wild Sex is not a textbook, but the amount of detail may at times be too much; however, it delivers the information in relatively short chapters, ideal for busy people to read in short bursts. Readers who love National Geographic and enjoy learning about biology and life sciences are probably going to enjoy this book.