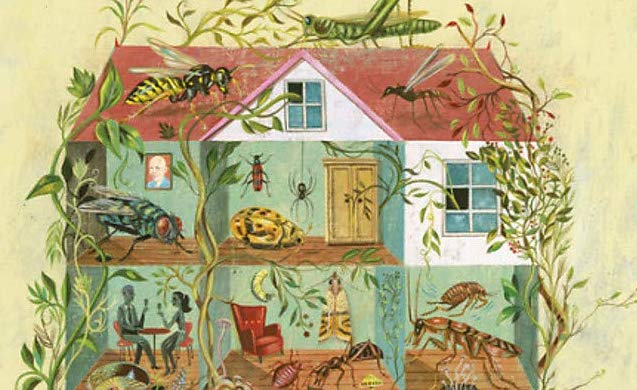 Never Home Alone: From Microbes to Millipedes, Camel Crickets, and Honeybees, the Natural History of Where We Live by Rob Dunn

Camel crickets can turn industrial waste into energy, showerhead gunk can cause infections, and accidental ingestion of cat feces can increase our tolerance to risks. These findings are just the tip of the iceberg for Professor Rob Dunn’s work in citizen science.

His book, Never Home Alone, encompasses these scattered findings into a cohesive narrative. Reading Never Home Alone is a 256-page-deep nosedive into the mind of a chatty biologist. Every chapter focuses on a distinct use-case for biodiversity preservation and the journey lands you with a much richer understanding of the every-day life that often unknowingly surrounds us!

With witticisms like “What the heck, I had tenure,” as a partial rationalisation for pursuing statistically unlikely theories, it’s hard not to be charmed by this self-proclaimed balding biologist. Never Home Alone is fact-filled, somewhat alarming, and sometimes revolting.

Among the numerous experiments and scientific observations, Dunn makes a conscious effort to acknowledge the sociopolitical decisions involved in research. For instance, an expert in the growth and identification of fungi from Denmark made a discovery that put Dr. Birgitte Anderson at odds with the economic incentives of business leaders: fungi in homes comes pre-loaded in brand-new drywall. From 13 sheets of drywall studied for around 70 days, a fungi implicated in the complex mix of causes of Parkinson’s disease was found on 100% of samples. Another known allergen and opportunistic pathogen grew on 85% of samples. Toxic black mold appeared on 50% (as long as the drywall isn’t getting wet, you should be fine though). Despite being aware of the potential consequences of her research, Dr. Anderson made the decision to publish anyway and went on to develop new methods of detecting the toxins from these fungi in dust.

Dunn also describes the importance of trust in science. If a researcher establishes trust among his quorum of colleagues, science moves faster. Everything happens faster. He credits this trust for picking up the call from a colleague in the middle of the night and pursuing one of his largest citizen science studies spanning continents examining the composition of biofilm on showerheads.

Other social observations include holding the frustration-of-not-knowing accountable for persistence to continue with studies and, acknowledging the knowledge and time bridging capabilities Postdoctoral researchers bring to the table.

As a species, we have become preoccupied with sterilizing our homes, regulating their temperature, and using pesticides around them—seemingly with a vengeance—that we have created an entirely new playground for evolution.

We have tipped the scales away from the harmless or even helpful bugs, in favor of some of the pests (e.g. cockroaches). Dunn summarizes this concept beautifully with the following quote:

If ecologists have learned anything in the last hundred years, it is that when you kill species but leave the resources upon which they feed, the tough species not only survive but thrive in the vacuum created by the death of their competition.

After reading about the broad scope of work highlighting the value of household species, it wouldn’t be unusual to wonder why these applications aren’t yet catalogued or more widely implemented. Dunn has a threefold explanation: (1) we simply turn a blind eye to the species closest to us and assume someone else is already doing the work, (2) neither ecologists nor applied biologists value work at the interface of ecology and industry and it’s hard to do work your peers don’t value and, (3) we are spending millions randomly searching species in the jungles instead of letting our understanding of basic biology guide our searches.

Never Home Alone begins with a chapter-long anecdote of the journey and discoveries made by the father of microbiology, Anton Van Leuwenhoek. The account of Van Leuwenhoek’s discoveries help us see the wonder in the composition of simple things around us. Importantly, this wonder helps us to look past our fear of pathogens to see the importance of bacteria and other small animals.

The second chapter follows a thermophile, a kind of bacteria, thought only to be present in hot springs. Turns out, there’s a Hot Spring in the Basement — your hot water heater. This chapter explores how hot water heaters can replicate conditions needed to cultivate a thermophile that is integral expediting the DNA manipulation process (specifically the strand separation stage).

The next chapter, Seeing in the Dark, follows Dunn’s citizen science project to explore bacteria all around our homes. He compares bacterial diversity on door trims, kitchen surfaces, pillowcases, and toilet seats of 40 homes in North Carolina. When cross-referencing his findings with those from the International Space Station, he found similarities with bodily bacteria found on toilet seats… and that is just the beginning.

The origin of cholera was discovered by mapping the spread of disease in the 1800s. In modern day, maps along with studies on Amish bedrooms and Finnish backyards show the Absence [of biodiversity] as a Disease. Inspired by a map indicating chronic diseases were more prevalent in urbanized locales, award-winning metapopulation ecology expert, Ilkka Hanski gathered two colleagues and took off on a journey exploring Finnish backyards to determine which strains of bacteria should be allowed back into households.

The mysteries in showerhead gunk are unveiled and its conclusive, you are Bathing in a Stream of Life, chapter 5, shows us. Dunn delves into the findings from his multi-continental citizen science project to explore shower gunk. Along the way, Dunn also supplies the history of bathing and how water gets into our homes.

The Problem with Abundance (chapter 6) emphasizes the importance of studying the tens of thousands of fungal species discovered that have yet to even be named. It primarily focuses on the discoveries of a Denmark based Fungi expert, Brigitte Anderson.

Dunn refers to any individual who chooses to see and study species in remote locales in place of those closer at hand as a Farsighted Ecologist. Dunn sets up the narrative in this shorter read for the proceeding chapters by identifying the gaps in our knowledge of household arthropods.

Chapter 8 explores applications of multiple arthropods; from mill moths to wasps.  But What Good is a Camel Cricket? The central focus of this chapter – the camel cricket – is an introduced species found in basements across North America. Dunn derived a theory from his understanding of the basic biology of this arthropod and was able to convert a toxic waste product of the paper industry to biofuel.

The Problem with Cockroaches Is Us. Dunn guides us through various studies detailing the remarkably rapid evolutionary capabilities that make these pests infamously resistant to any of our traps.

Look What the Cat Dragged In; a parasite that has the potential to increase your risk tolerance (if trace amounts of its feces are ingested – it’s more common than you’d think).

Newborns are virtually defenseless (especially in the first 24 hours) to the countless bacterial species enveloping our air and bodies. So, when an antibiotic-resistant pathogen began claiming lives in the 1950s, two academics began Gardening the Bodies of Babies with small doses of a similar, beneficial strain in hopes of preventing infection, hence inventing and proving the effectivity of vaccines.

Based on the Korean concept of sson mhat (i.e. hand taste), Dunn set off to test The Flavor of Biodiversity. He designed a two-fold experiment: (1) fifteen bakers from different countries tasked to make a sourdough starter with the same ingredients (the only variable factors being the bodies of the baker and the air in their homes/bakeries) and (2) a multi-continental survey to characterize microbes in starters. This chapter is packed with information on the history of breadmaking, people’s journeys with their starters, and Dunn’s concluding remarks.

This book isn’t a field guide of the critters crawling around the house, but rather, a learning opportunity for the vast amounts of fascinating research being done on household biodiversity proving that the bacteria, fungi and even bugs can be of value.

If you’ve still got an appetite after reading this book or if Dunn’s wonder and enthusiasm has even slightly rubbed off, then be sure to prepare a yummy Ant Picnic or dive in with Adrift. You can also participate in Dunn’s own project, Never Home Alone, on iNaturalist.

This review is part of an ongoing series of book reviews written by members of Dr. Ashley Rose Mehlenbacher’s research team in partnership with SciStarter and published by agreement with Science Connected. If you have a recommendation for a book to review, please contact SciStarter Editor Caroline Nickerson at CarolineN@SciStarter.org. This work has been partially supported by the Ontario Ministry of Research, Innovation and Science’s Early Research Award program; and the Social Science and Humanities Research Council of Canada Insight Grant program. Views expressed are the opinions of the author and not of Science Connected or funding agencies.

Anjiya Sharif is an undergraduate student at the University of Waterloo studying Chemical Engineering. Her contributions to Networked Expertise research stem from her interest in written communication and exploring interdisciplinary team dynamics. She hopes to use her technical academic background to bring fresh insight to the study of expertise.