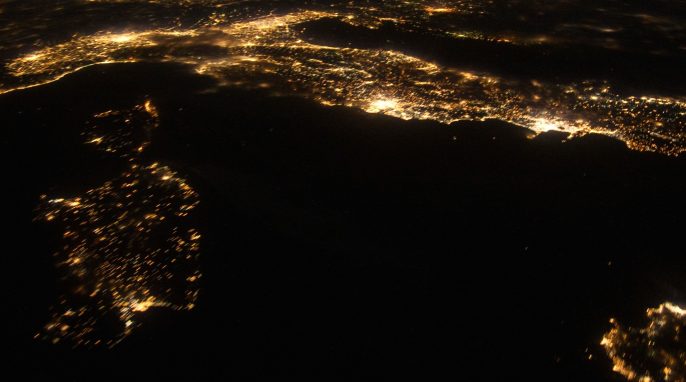 As soon as it gets dark, street lights, which have become widespread in the developed world—and are rapidly expanding in the developing world—are switched on. Indeed, since the second half of the twentieth century, Earth has become brighter at night. Now, new satellite-based research shows that our outdoor artificial night-lights are still spreading to more areas on Earth and have gotten brighter over the past few years.

How night-lights impact the world

Outdoor lighting is regarded as a necessity, especially in highly populated areas, but artificial night-lights are an environmental pollutant, disrupting processes such as light-dark cycles in nocturnal animals—those that are active at night—and affecting plants and microorganisms. Prolonged exposure to artificial night-lights has also been suspected in affecting our health and sleep patterns.

During the second half of the twentieth century, outdoor lighting grew at a rate of 3 to 6 percent per year. The artificial sky glow created by our night-lights is one of the most visible forms of light pollution. Most of the populations of Europe and the US are exposed to light-polluted skies at night. As a result, almost two-thirds of Europe and 80 percent of the US cannot see the Milky Way.

Even “pristine” or protected areas that lack any human activity are affected by lights hundreds of kilometers away. Consequently, pristine skies that are not shrouded by sky glow are becoming rare in many regions.

[tweetthis]Night-lights aren’t just for kids. Learn more about the impact of growing, glowing LED lights on the world.[/tweetthis]

A new way to research night-lights

Christopher Kyba, a researcher from the German Research Centre for Geosciences GFZ, Potsdam, Germany, wanted to find out whether the use of night-lights is still on the rise globally or has leveled off. “I don’t think anyone has really looked at global lighting change before, at least not with the focus on whether lights are increasing,” he said.

His team used a calibrated satellite radiometer sensor to measure global changes in the scale of night-light emissions as well as the brightness or radiance of lights from 2012 to 2016. This sensor measures nighttime radiance from light between 500 to 900 nanometers (nm) in wavelength (human visual system is 400-700 nm) at a finer spatial resolution of 750 meters, which can detect changes in lighting at the neighborhood level.

“It’s brightening most rapidly in developing countries, but it’s also brightening in wealthy countries that were already bright in 2012 when the study began,” said Kyba. “Our results are consistent with the hypothesis that increasing ‘energy efficiency’ of LEDs is not saving energy at the national and global scales, but instead is simply resulting in greater light use.”

The results of this study showed that from 2012 to 2016, Earth’s artificially lit outdoor area rose 2.2 percent per year. Areas that were continuously lit grew brighter by 2.2 percent. Most countries showed an increase in brightness, particularly those in Africa, Asia, and South America. Brightness remained stable in some of the world’s brightest countries such as the United States, Spain, Italy, and the Netherlands. Only a few regions showed a drop in brightness, notably, war-torn nations such as Syria and Yemen.

The main aim of the LED “lighting revolution,” which involves transitioning to the more energy-efficient light-emitting diodes (commonly known as LED lights) as opposed to the more energy-consuming incandescent and fluorescent lights, is to decrease overall energy consumption.

As cities switch from orange sodium lamps to more energy-efficient “white” LED night-lights, the satellite sees this as an overall decrease in light because, as Kyba explains, it cannot see the blue light emitted by LED lamps, which is below 500 nm in wavelength. For this reason, Kyba’s team expected to see overall decreases in light in countries such as the US and Germany. But, instead, they saw that total light in Germany actually increased, while it was constant in the US.

“This means that while many cities appeared to get darker, many other places must have installed new or brighter lamps,” revealed Kyba. “These new lamps need energy, and therefore the savings at the national level aren’t as large as what you would think, based on all the reports of LEDs saving energy.”

In an effort to promote the sustainable development of cities, governments strive to reduce the cost of LED night-lights. However, falling costs may translate to more lights installed, resulting in more energy consumed overall.

“Cheaper light from LEDs is likely to lead to new uses of light outdoors. For example, in the past it was not common to light bridges, but this is becoming increasingly common,” noted Kyba. He adds that this can harm the fish that swim beneath.

There are many cases of street lights installed in locations where they are not necessary or just too bright to serve the purpose. Kyba compares the ring highway around Berlin, which is unlit and has no speed limit in some places, with the ring road around Calgary, which has a speed limit of 110 kmh (68 mph) and is lit. “If you can drive 170 kmh on an unlit road in Berlin,” he claims, “why does the ring road around Calgary with a 110 kmh limit need to be lit?” Another example is in the southern Indian city of Thiruvananthapuram, where costly high-mast lamps have been installed at unsuitable locations, blinding drivers with glaring light and generating high power bills.

While Kyba agrees that we should have lighting development, he asserts that “it should be done with effective lighting” and that “it would be a terrible shame if the lights that were installed were ugly, glaring, and didn’t necessarily improve the visual situation.”

Download the citizen science app “Loss of Night” on Android and iOS to monitor sky glow by simply counting stars.

For more examples of good and bad lighting, head over to Kyba’s blog.

If you are interested in the study and want more information about effective lighting, check out the International Dark-Sky Association.

This nighttime panorama of much of Europe was photographed by one of the Expedition 30 crew members aboard the International Space Station flying approximately 240 miles above the Tyrrhenian Sea on Jan. 25, 2012. Most of the country of Italy is visible running horizontally across the center of the frame, with the night lights of Rome and Naples being visible to the center and right center, respectively. Sardinia, and Corsica are in the lower left quadrant of the photo, and Sicily is at lower right corner. The Adriatic Sea is on the other side of Italy, and beyond it to the east and north can be seen parts of several other European nations. Credit: NASA.