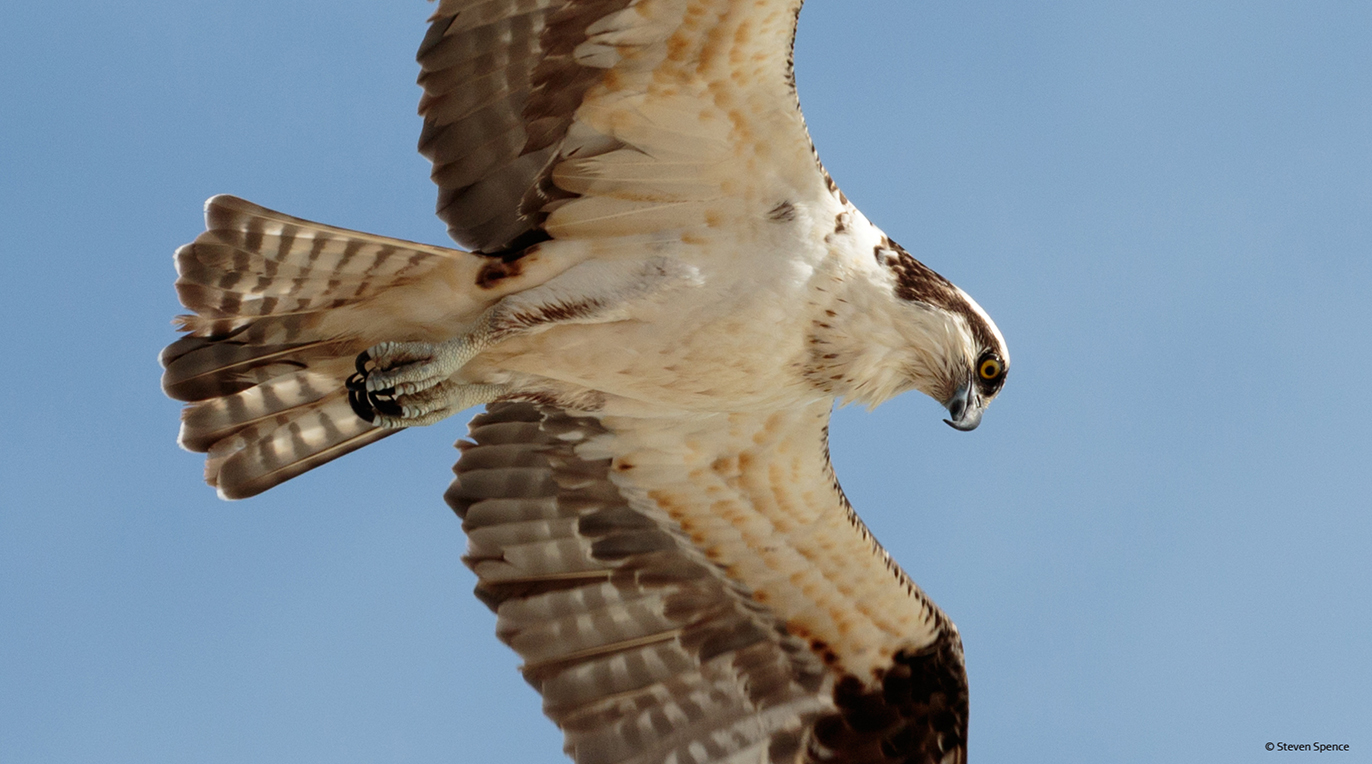 This bird may be called an osprey, a fish hawk, a river hawk, a sea hawk, or even a fish eagle! Learn more about the osprey.

A Bird of Many Names

Depending on where you live, the bird pictured here may be called an osprey, a fish hawk, a river hawk, a sea hawk, or even a fish eagle! To avoid such confusion, scientists use one name, usually derived from Latin, to describe each species. The osprey’s scientific name is Pandion haliaetus. Pandion comes from Greek mythology about an Athenian king [2] and his children [3]. Haliaetus comes from the Greek ἁλιάετος and means “fishing eagle.” Where the English name osprey comes from is not entirely clear, but it is thought to have derived from the Medieval Latin avis prede (“bird of prey”) through the Norman ospriet.

What about the Seattle Seahawks?

You may notice that the American football team’s name is written as one word, whereas the actual name of the animal is “sea hawk.” In fact, the team’s logo used on helmets and marketing materials is loosely based on a Native American tribe’s transformation mask [4] showing a mythical eagle transforming into a human when the mask is opened.

The team does have a live raptor—a bird of prey—fly out before each home game; however, the U.S. Fish and Wildlife Service prohibits the use of a native bird, such as an osprey, for commercial purposes, so the Seahawks’ falconer trained an augur hawk (Buteo augur) named Taima for the duty. The augur hawk was chosen because it has similar coloration to an osprey.

All over the World

Ospreys live on every continent except Antarctica. Most subspecies of raptors are quite distinctive; for example, the bald eagle, golden eagle, Spanish imperial eagle, and other eagles look very different from one another. Ospreys, on the other hand, have a very similar appearance no matter where they are in the world.

Ospreys are the apex predator in their ecological niche. They specialize in catching and eating fish, which composes 99 percent of their diet. One of their special adaptations that aids them when fishing is the ability to close their nostrils to prevent water going in when they dive for fish. Another adaptation is the dark bands around their eyes, which help reduce the sun’s glare as they scan the water for fish. Yet another fascinating adaptation is that unlike hawks, eagles, and falcons, an osprey can move its fourth toe to the front, allowing it to grip slippery fish more firmly. The only other raptor with this ability is an owl, but ospreys are much more closely related to eagles and hawks than to owls.

Being on Top Comes at a Cost

While eating and not being eaten is a great privilege, it also comes with a downside for ospreys. Scientists have demonstrated that certain pollutants get concentrated as they are absorbed along the food chain. This is referred to as bioaccumulation. In a 1967 study on DDT, scientists documented the concentration in sea birds reaching over 200,000 times the level in the water.

It is easy to see that with fish as ospreys’ food source, waterborne pollutants become highly concentrated in the birds’ bodies. This is one of the reasons scientists consider ospreys a sentinel species for monitoring the environment [5].

Osprey populations today are doing well, but this was not always the case. As apex predators they ingested large doses of DDT, an insecticide used to kill mosquitoes in the 1950s and 1960s. With their fish diet, ospreys have also been shown to ingest high levels of PCB compounds and heavy metals such as mercury. DDT caused the eggshells of ospreys and bald eagles to become very thin and break easily. Fewer and fewer birds hatched. DDT was officially banned in the United States in 1972, and osprey populations are now on the rebound.

As sentinel species, ospreys are ideal subjects for citizen science projects. They are  large, easily identifiable birds that build conspicuous nests. Many states run annual counts of breeding pairs. In addition to standard banding of birds for identification, New Jersey has introduced a secondary numeric red band on the feet of ospreys, easily visible to bird watchers. This makes it possible for observers to record the number on the band and report it without the bird having to be captured.

Many such opportunities exist. Here are two examples:

Please consider joining such an effort in your area.

[1] A traditional wedding poem from over 2,500 years ago (http://web.mnstate.edu/gracyk/courses/web%20publishing/poemsShihChing.htm).

‘Fair, fair,’ cry the ospreys
On the island in the river.
Lovely is this noble lady,
Fit bride for our lord.

In patches grows the water mallow:
To left and right one must seek it.
Shy was this noble lady;
Day and night he sought her.

Sought her and could not get her;
Day and night he grieved.
Long thoughts, oh, long unhappy thoughts,
Now on his back, now tossing on to his side.

In patches grow the water mallow;
To left and right one must gather it.
Shy is this noble lady;
With bells and drums we hearten her.

[3] Pandion’s two daughters, Philomela and Procne, and his son-in-law, Tereus, become a nightingale, a swallow, and a hawk respectively. One of his sons, King Nisos of Megara, was transformed into an osprey.

[4] The Kwakwaka’wakw nation living in the British Columbia and Vancouver Island area. More on the logo and the mask at http://www.burkemuseum.org/blog/mask-inspired-seahawks-logo.

More about the Kwakwaka’wakw nation at https://en.wikipedia.org/wiki/Kwakwaka%27wakw.

“Several characteristics support the choice of the osprey as a sentinel species, including: (1) fish-eating diet atop the aquatic food web, (2) long-lived with strong nest fidelity, (3) adapts to human landscapes (potentially the most contaminated), (4) tolerates short-term nest disturbance, (5) nests spatially distributed at regular intervals, (6) highly visible nests easily located for study, (7) ability to accumulate most, if not all, lipophilic contaminants, (8) known sensitivity to many contaminants, and (9) nearly a worldwide distribution.”

[8] https://goo.gl/d2emVr. “Pandion homalopteron … size of the living species P. haliaetus and differed from it only in minor details.”

A second extinct species known from fossils that had some different features from today’s ospreys was found in Florida (Pandion lovensis) and is dated at 9 million years old. https://www.flmnh.ufl.edu/florida-vertebrate-fossils/species/pandion-lovensis/