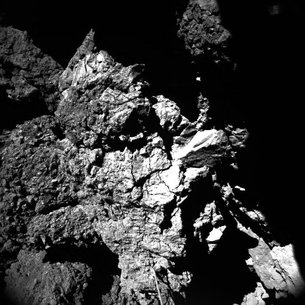 Many of us learned in school that comets were lifeless balls of frozen gas and dust hurtling through space. In recent years, however, we have changed the way we think about comets, which are now thought to be the couriers that delivered life to a young Earth.

Boosting the courier theory, the European Space Agency’s comet-chaser craft named Rosetta has found complex organic molecules, the building blocks of life, on a comet. These are the exciting initial results of the data analysis using the information returned by Rosetta’s lander, Philae, last November.

The little lander has been struggling for months to communicate, but the data finally arrived and is still undergoing analysis.

Science on the Surface of a Comet

After touchdown, the gas-sniffing instruments (named Ptolemy and COSAC) analyzed samples and determined the chemical composition of the comet’s gas and dust–important tracers of the raw materials present in the early Solar System.

When the lander reached the surface of the comet, it kicked up a lot of dust. COSAC analysed the dust and found 16 organic compounds, including compounds rich in carbon and nitrogen. Four of the compounds found – methyl isocyanate, acetone, propionaldehyde and acetamide – have never before been detected in comets.

Meanwhile, Ptolemy sampled ambient gas entering tubes at the top of the lander and detected water vapour, carbon monoxide, and carbon dioxide, as well as smaller amounts of carbon-bearing organic compounds, including formaldehyde.

The compounds detected are significant because they play a key role in the prebiotic synthesis of amino acids, sugars, and nucleobases: the ingredients for life. For example, formaldehyde plays a role in the formation of ribose, which ultimately features in molecules like DNA.

The existence of such complex molecules in a comet, a relic of the early Solar System, suggests that chemical processes at work during that time could have played a key role in the development of life.

Early results from Philae’s first suite of scientific observations of Comet 67P/Churyumov­-Gerasimenko were published in a special edition of the journal Science.