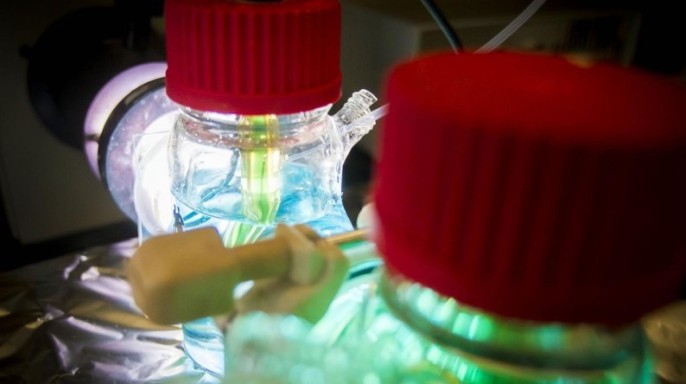 Most solar energy systems rely on using sunlight as an immediate power source, but can’t function at night or in cloudy weather. So, what if a solar cell could store solar energy and release it for use after the sun goes down?

That’s the technology a materials science and engineering team from the University of Texas at Arlington has developed. They have successfully built a new energy cell that can store large-scale solar energy, even when it’s dark. The prototype is an “all-vanadium photo-electrochemical flow cell” that allows for efficient and large-scale solar energy storage even at nighttime. The team is now working on a larger version that is to be built and evaluated very soon, using a bigger prototype cell that has already been designed.

“This research has a chance to rewrite how we store and use solar power,” says Fuqiang Liu, assistant professor in the Materials Science and Engineering Department. “As renewable energy becomes more prevalent, the ability to store solar energy and use it as a renewable alternative provides a sustainable solution to the problem of energy shortage. It also can effectively harness the inexhaustible energy from the sun.”

Scientists have been working on ways to generate clean energy from alternative fuels. Recently, we have reported on a team generating electricity from evaporation and Stanford’s new clean hydrogen production system. Yet, solar power remains a readily available source of clean energy.

Khosrow Behbehani, dean of the College of Engineering, said the groundbreaking research has the potential to positively affect the way we generate and consume energy.

“Dr. Liu and his colleagues are working to help us shape a more sustainable future and are taking innovative steps to improve our ability to harness and use one of the larger sources of energy available to us – the sun,” Behbehani says.

Dong Liu of UT Arlington says that a major drawback of current solar technology is the limitation on storing energy under dark conditions.

“We have demonstrated simultaneously reversible storage of both solar energy and electrons in the cell,” Liu says. “Release of the stored electrons under dark conditions continues solar energy storage, thus allowing for un-intermittent storage around the clock.”

When Can I Buy One?

This research should allow solar energy storage to be done in a much higher capacity and on a much larger scale. Fuqiang Liu tells EH Science that, “We are currently working on some technical barriers to commercialization such as system operability, stability, and reliability.” When those challenges are resolved, the new solar energy cell should be ready to head into production.

“Using an all-vanadium photo-electrochemical cell gives our energy storage an edge over other systems,” explains Zu Wei, a UT Arlington doctoral candidate. “This cell allows us to attain higher storage capacity in a smaller unit.”

So, in addition to being able to store energy through the night, approximately how much more efficient is the new solar energy storage cell compared to current solar storage systems? The researchers tell us, “Our system is different than the existing solar energy storage system; therefore, a precise comparison is difficult to make. However, our system has already demonstrated about 95% Faradaic efficiency and more than 10 times higher in peak Incident photon-to-current efficiency (IPCE) compared to conventional photogeneration of hydrogen, a widely accepted approach for solar energy storage.”

This work was funded by the 2013 National Science Foundation. The $400,000 Faculty Early Career Development grant was awarded to Liu to improve the way solar energy is captured, stored and transmitted for use. Lead author Dong Liu, who recently defended his UT Arlington Ph.D. dissertation in 2015, was assisted with the research by Zi Wei, a UT Arlington doctoral candidate.

The research is detailed in “Reversible Electron Storage in an All-Vanadium Photoelectrochemical Storage Cell: Synergy between Vanadium Redox and Hybrid Photocatalyst,” published in the most recent edition of the American Chemical Society journal ACS Catalysis.

Top Image: The UT Arlington team developed a new solar cell that is more efficient and can store solar energy even at night. (UT Arlington)