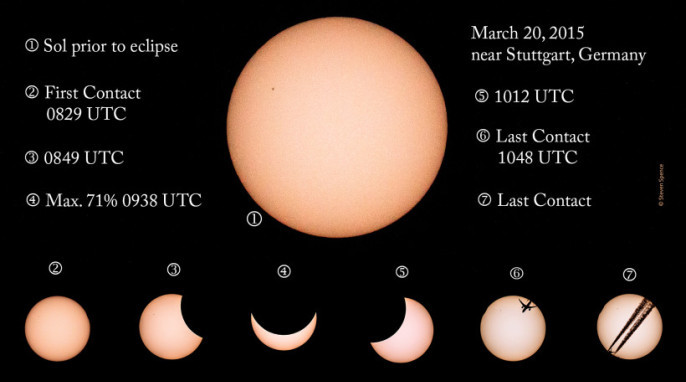 On March 20, 2015, people across Europe, northern and eastern Asia, and northern and western Africa were treated to the best view of a partial solar eclipse. Steven Spence, a member of EH Science’s Contributors Community, was fortunate to witness this special celestial event, and today he shares with us his experience of photographing it. Don’t miss Steven’s other photos, including Winter Bees, First Visitors.

Where I live in Germany we were lucky with the weather and had clear skies for the partial solar eclipse, and I found a way to give you a good idea of what it looked like.

I used an astronomical film sheet, cardboard, paper, and adhesive tape to make my own stick-on filter for the camera lens. It worked so well that all I could see through it was the sun; however, the colors were distorted, so those you see in these images are an approximation with a dose of artistic license thrown in.

I saw only one sunspot, probably the size of Earth, but I was surprised there weren’t more. I think that having a greater number of them could have made focusing shots easier.

Image #3 shows the moon is sliding across from the right

Image #4 was taken when I thought the eclipse was at its peak, but in fact I missed it by one minute (close enough!).

Image #5 is of the moon sliding away to the left

Images #6 and #7 show my lucky break!  Just as I was wrapping up the shoot, a plane came into view (remember that I was looking through the filter, not at the sky) and I reacted as quickly as I could. I didn’t get it in the middle of the sun, but it still makes for an interesting finish to the eclipse.