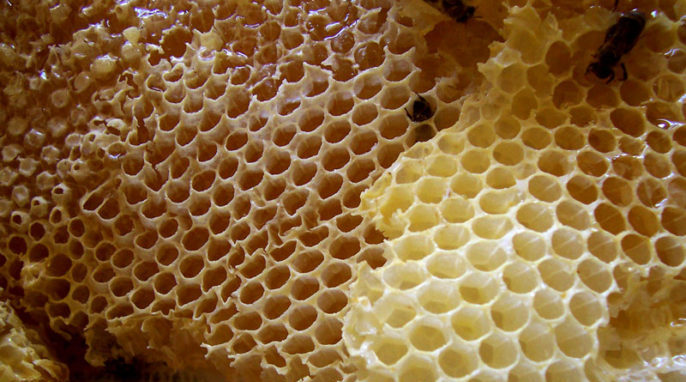 Zoom in to the nanometer scale—less than the width of a human hair—and you might think the new device designed by a team of scientists led by Lei Zhang is a honeycomb. Upon closer inspection, you would find that the hexagonal structure is made of gold and that a long string of organic molecules winds up and down through each hexagonal space. And one more thing: this device, so perfectly structured in the world of atoms and molecules, can create electricity from light.

These researchers from the Universities of Strasbourg and Nova Gorica have developed a novel structure that could overcome some of the obstacles faced by organic solar cells. As the name implies, these types of solar cells employ an organic molecule that absorbs light to create an excited and negatively charged electron. However, the electron leaves behind a positively charged hole when excited, and these oppositely charged particles need to be separated—electrons going to the cathode, holes to the anode—to generate current, in order for the solar cell to be useful. This separation process, which is very difficult to achieve in organic solar cells, is the focus of extensive scientific research.

One possible solution to this technical obstacle is to use an organic nanowire as a light absorber. The nanowire consists of a long chain of the organic absorbing material stacked one after another. The benefit of such a structure is its high surface-to-volume ratio, which means that electrons and holes spend little time close to one another before reaching the nanowire’s surface and jumping their separate ways to the cathode and anode. This idea has tantalized researchers for some time; however, it has been difficult to create a structure that easily connects the nanowire to the electrodes.

Zhang’s team has found a promising solution through a both practical and artful design. Beginning with a silicon substrate acting as the anode, the researchers patterned a gold honeycomb on top of it to act as the cathode. Finally, the organic nanowire, made of a molecule known as PTCDI-C8, was deposited to snake across the top of the honeycomb, then down along the exposed silicon base, then up along the gold honeycomb, and so forth, like a snake weaving through the hexagons. Such a unique design creates innumerable contacts between the organic wire and the gold (cathode) and silicon (anode), giving plenty of opportunities for the photoexcited electron and hole to separate and zoom away to create an electrical current.

The true beauty of this device may rest in its method of creation. Tiny—in fact, nanoscale—spheres were set onto the silicon substrate in a honeycomb shape to act as a mask, just like using tape to cover parts of a wall you don’t want to paint. Then, gold was deposited over the entire silicon substrate. Finally, the spheres were etched away, leaving a perfect honeycomb gold electrode. This entire process creates a large enough honeycomb mesh to allow for hundreds of organic nanowires to lace through it.

Using this new nanowire device, half of all photoexcited electrons and holes could escape to the electrodes to contribute to the electrical current: a very good number for organic solar cells. In addition, Zhang and his team hope to use the device to test the fundamental properties of one-dimensional organic materials by varying the electrode size and measuring changes in performance. The device could also be used as a photodetector, and its design could be a template for light-emitting diodes. Above all, the finely tuned structure marks another significant advance in scientists’ ability to control the patterns of nature at the levels of atoms and molecules.