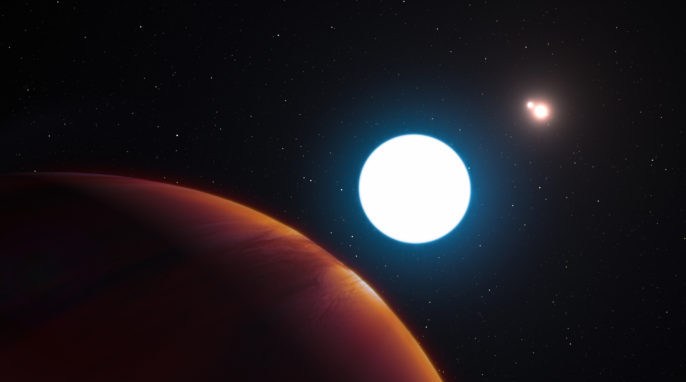 Recently, the planet HD 131399Ab was discovered by a team of astronomers at the University of Arizona. HD 131399Ab is located approximately 320 light-years from Earth and is thought to be 16 million years old—a very young exoplanet indeed. It is also one of the coldest and smallest of the directly imaged exoplanets—planets outside our Solar System—with a temperature of 850 degrees Kelvin and a size of around 4 Jupiter masses.

However, the most spectacular thing about HD 131399Ab is not its planetary features, but rather the fact that it orbits around three suns!

This may sound familiar to fans of Isaac Asimov’s Nightfall (1990), a story about the planet Kalgash, which revolves around six suns, meaning that is constantly awash in daylight. The inhabitants of Kalgash have thus never known night, nor ever seen stars or other distant celestial objects. Their planet may always be illuminated—but their minds certainly do not seem to be!

Onos is Kalgash’s equivalent of Earth’s Sun and is situated 10 light-minutes away from the planet, very much like our own Sun, located at about 8 light-minutes away from Earth. Onos is the sun that provides Kalgash with the most light and heat. The other five suns are much more distant in comparison but are close enough to provide Kalgash with sufficient light for its inhabitants to never know darkness (at least, that is what they think). Onos is also a yellow dwarf sun, again, much like ours, while some of the other suns form binary systems.

In the story, one of the main characters, who is an astronomer named Beenay 25, discovers an anomaly in Kalgash’s orbit around Onos. His calculations show that once every 2,049 years Onos is eclipsed, leaving Kalgash in a brief state of darkness, something its inhabitants have never known before.

So how does this compare to the reality of the recent discovery of the triple star system HD 131399Ab?

A planet with many suns would be a wonder to behold. First, it is a wonder of nature that a planet could have formed in such a star system. The complexity of the star system violates a few of the main points of most of the leading planetary formation theories. However, in keeping with Asimov’s science fiction world, the exoplanet HD 131399Ab has one primary sun, which, like Onos, is very similar to Earth’s. Moreover, HD 131399Ab’s other two suns form a binary system, just like four of Kalgash’s stars do.

Maciej Konacki, from the California Institute of Technology, describes HD 131399Ab’s binary stars as “more or less act(ing) as one star.”

Kevin Wagner, the first-year PhD student at the University of Arizona who discovered the planet and who is part of NASA’s Nexus for Exoplanet System Science project, says that the planet HD 131399Ab’s orbit is approximately 550 Earth-years long, a long time to be blasted with seemingly never-ending sunlight. He goes on to say that for almost half that time, all three suns are visible very close to each other in the sky.

The results of this are surprising.

Instead of constant daylight, there is a typical day/night cycle with beautiful triple-star sunrises, and triple-star sunsets to add to the mix. However, Asimov’s Kalgash scenario is not out of the real-life equation yet.

As the planet’s orbit progresses, its suns appear to grow farther apart, and the result of this is that one star will set while the other two rise, and vice versa. The suns’ constant presence in the planet’s sky triggers a real-life Kalgashian effect, where HD 131399Ab is in constant daylight for a significant fraction of its orbit.

If intelligent life exists on HD 131399Ab, they would not possess the fear of darkness as the people of Kalgash do, but they might suffer similar problems to Earth’s Scandinavian people, whose internal clocks are thrown out of sync in summer, due to the midnight sun. Because of Earth’s tilt, the poles experience long months of winter darkness and summer light, and in those summer months, complaints of sleeplessness are rife.

What the Future Holds

The team of researchers responsible for HD 131399Ab’s discovery have noted that they did not have to wade through many systems to find this multi-sun system, even though it is rare, and have said that they will continue observing the night sky for other systems of this kind.

Let’s hope they do not discover a star like the one in Asimov’s Nemesis, a story about a doomed planet, orbiting a star so unstable and volatile that its imminent death will destroy everything orbiting it.

Luigi Papagno is a passionate observer of celestial objects. To learn more about astronomy and how to get the best out of your stargazing equipment, check out his blog or follow him on Twitter @f1telescopes, where he shares insights on  viewing the night sky.

How HPV Tricks Your Immune System