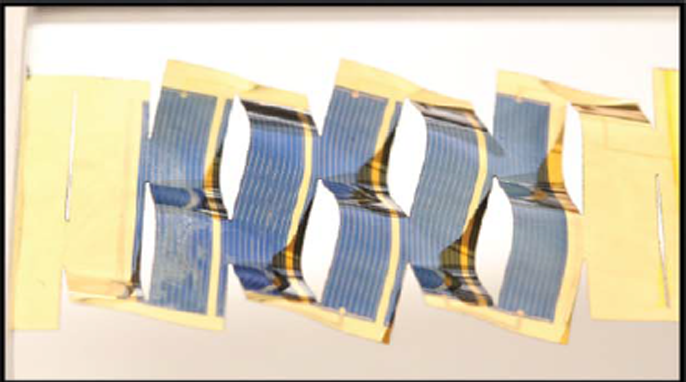 Artists in  seventeenth century Japan probably never expected their unique paper-cutting artwork, known as kirigami, to inspire leading-edge technology four hundred years later.  But the traditional art and new science have been recently well-paired to improve renewable energy technology, according to a recent paper1 in Nature Communications that details a creative design for a lightweight solar cell that tracks the Sun’s position throughout the day.

Kirigami is the art of cutting paper to create elaborately textured, three-dimensional works of art.  Kirigami artists generally begin by cutting straight or curving lines in a thin piece of paper. When the paper edges are pulled, the applied tension causes the paper to bulge out of its plane and rotate around the cuts, making a textured, wavy design. Though the artistic form was originally found many years ago in Japanese temples as offerings to gods, the technique is now commonly incorporated into greeting card decorations and school projects.

However, it just so happens that this paper-cutting art is perfectly suited to solve a difficult problem in the world of solar technology – how can we make flat solar panels that track the position of the Sun in the sky? This is an important design issue because solar cells operate with maximum efficiency only when light rays hit them perpendicular to their surface. As the Sun moves through the sky, light rays will arrive at a stationary solar panel at larger and larger angles, especially in the morning and evening, greatly decreasing the amount of power produced by the solar cell.

Cutting Down the Cost and Size of Solar Systems

Engineers have already attempted several solutions to the problem of solar cell efficiency, the most effective being a complex mechanical system attached to the bottom of a solar panel that rotates it to keep pace with the Sun. This design provides a 20-40% boost in energy production, but several disadvantages limit its widespread use. First, the tracking system accounts for at least 12% of the total structural costs of the cell, and this percentage increases each year as the prices of other cell components plummet. Second, the tracking systems are large and cumbersome, making rooftop residential installations impossible. This is a severe drawback, as residential installations account for around 80% of new production and are the backbone of the future of decentralized, distributed energy generation.

How the Kirigami Solar Cell Works

The kirigami-inspired tracking system avoids both of these obstacles. Here’s how it works. The makers  begin with a flexible organic film and make patterned cuts as shown in the figure below. When they pull on the film edges, known to engineers as applying a strain, the film buckles in the same way as paper used in kirigami (this is a common property of all thin, malleable materials). The authors determined the exact mathematical relationship between the amount of strain applied and the degree of buckling. As seen in part (c) below, the greater the strain, the more the film will buckle, allowing its surface to track the Sun when it is lower in the sky so its rays always hit perpendicular to the film surface. Fortunately, applying such a strain requires few additional structural components and, therefore, does not add more costs compared to conventional tracking systems.

With the kirigami device built, the researchers deposited a solar cell on the top of the buckling surface. Only solar cells that are able to flex to a similar degree as the film are useful; some types of cells, like crystalline silicon, are brittle and would crack from the strain. In this case, the inventors used a thin-film solar cell made of gallium arsenide, a material that bends well enough for this design.

In the steady, bright sunlight of Phoenix, Arizona, the kirigami-inspired solar cell performed just as well as a conventional tracking device and better than a static, flat panel that cannot capture as much sunlight in the morning and evening. This result demonstrates that the solar cell design could be integrated into home installations and provide around a 25% boost in energy efficiency.  The overall benefits are several: the kirigami device is lightweight, allowing installation in a wide variety of environments. Second, the design avoids using heavy and more expensive mechanical components, reducing the cost while providing the same increase in energy efficiency as conventional systems.

Seeking inspiration from the artistic world is not a common tool in most scientists’ belt. However, an idea with such a successful result as the kirigami solar cell serves as a great reminder that creative ideas can not only be found across disciplines but also hundreds of years in the past.